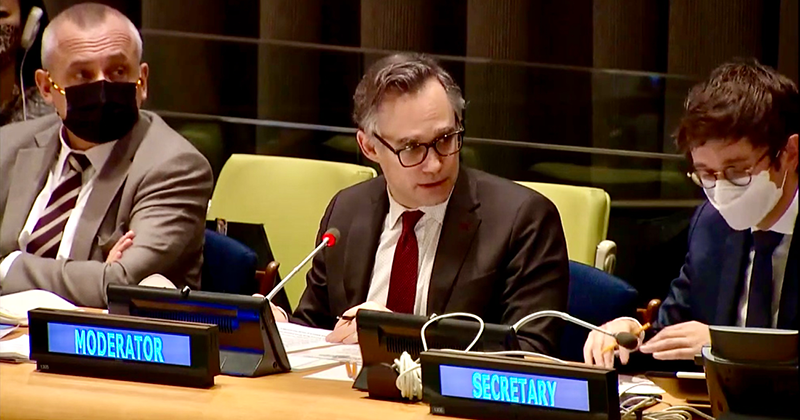 On February 22nd, a panel entitled “Frameworks for a Peaceful World–Promoting Peace, International Law and Digital Cooperation” was held at the UN Trusteeship Council Chamber. IPI’s Vice President, Dr. Adam Lupel moderated the panel, which was part of the third thematic cluster in a series of informal consultations on the Secretary-General’s report, “Our Common Agenda.” These consultations provide member states with further thinking on the follow up to the recommendations in the report, which represents the Secretary-General’s vision on the future of global cooperation and reinvigorating inclusive, networked, and effective multilateralism. This third thematic consultation focused primarily on inter alia proposals in chapter IV of the Common Agenda report. The session was dedicated to the inputs and perspectives of civil society, youth and the private sector.

Speakers participating in the debate included former Poland Prime Minister Hanna Suchocka and Dr. Amandeep Gill, President of the International Digital Health and Artificial Research Collaborative. Among the participants from the floor was John Frank, Vice President for UN Affairs of Microsoft.

Given recent events in Ukraine, Dr. Lupel said this discussion served as a reminder of “the importance of strengthening our commitments to multilateral cooperation and international law for the prevention of conflict and the maintenance of international peace and security for our common good.”

The meeting was presided over by Vice President of the General Assembly Philippe Kridelka, Permanent Representative of Belgium to the United Nations, and closing remarks were provided by Under-Secretary-General for Policy Volker Türk.