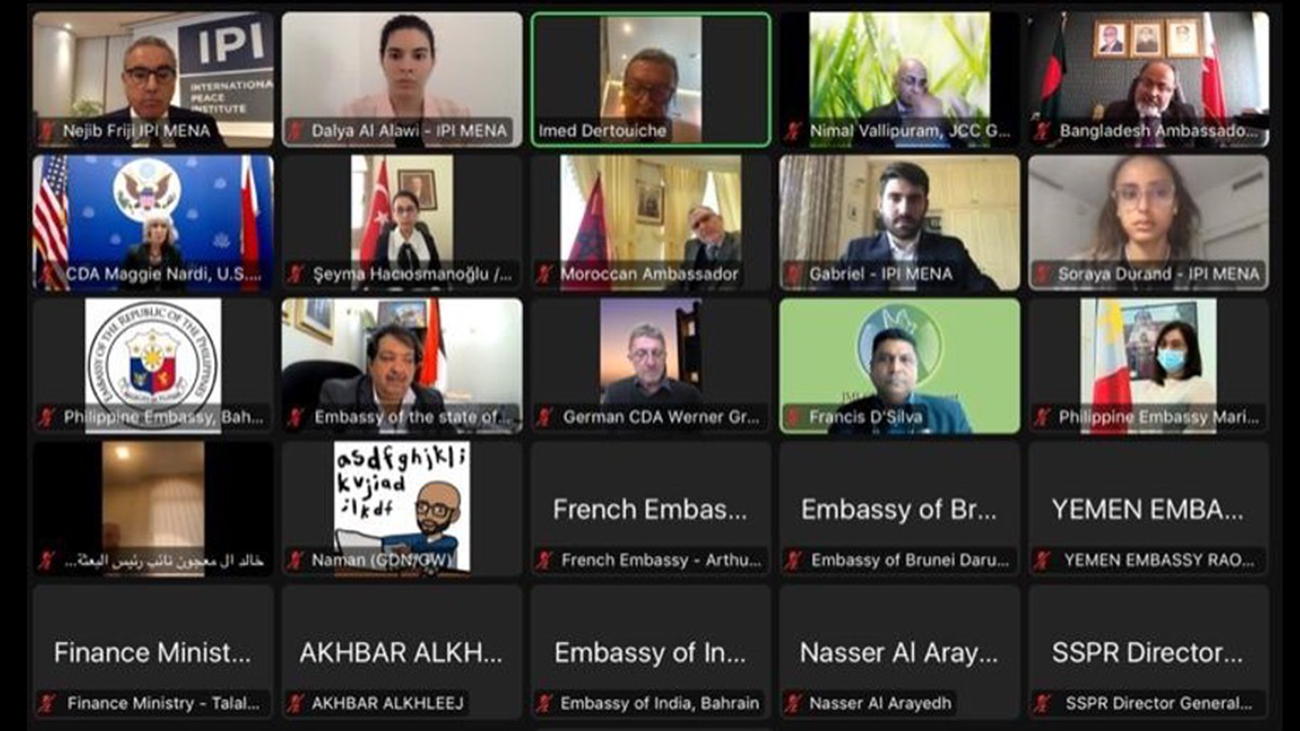 In a webinar organized on March 17th by IPI MENA under the theme “Energy Security in the MENA region and Beyond,” experts, government officials, members of the private sector, civil society and media representatives warned against the serious ramifications of the Ukraine conflict on the world energy order among other sectors.

Opening the webinar, IPI MENA Director Nejib Friji, warned “the conflict in Ukraine will undoubtedly have the most challenging geopolitical and economic consequences,” and regretted that “the war is waged by a military superpower which is at the same time an energy superpower.” Deploring “the humanitarian and material losses that the war is causing in Ukraine,” he reiterated solidarity with the people of Ukraine and “all other peoples that are victims of aggression, violence, and violations of territorial integrity and international law.”

He pointed to the war’s dramatic effects on energy security in the MENA region and beyond, as some countries, however, are dependent on Russian oil products in addition to other vital food items. He highlighted that some MENA countries have hardly any resilience to tackle the consequences of energy imports bills. Many of these countries and states may face unprecedented unrest.

Imed Drouiche, geophysicist and energy expert, underlined that despite OPEC Countries having the largest fossil energy stocks representing less than 50% of the total oil production of the world, they will not fill the gap left by Russian energy supplies to Europe and other major clients. Therefore “high prices will encourage diversification.”

“The challenge will be to continue the transition by decarbonizing all the oil production mainly using the blue hydrogens. Saudi Arabia and the UAE have already engaged in investing in blue hydrogens.”

Derouiche said the gulf countries are shifting from the water desalinization industry to renewable sources of energy, albeit slowly, and would take years to reach required levels. He argued that while some think nuclear energy is a game-changer for power supply in Europe, freeing the continent from Russian gas, the CAPEX procedures have proven the high cost endured during the whole process. He backed adopting “solar and wind as sources of energy as the right way.”

Nimal Vallipuram, Senior Analyst at JCC Investment wondered “where are we going to get the energy we need right now and how are we going to fit this into the Environment Social and Governance (ESG) framework?”

He said “in terms of ESG transition, it’s a question of how fast we need to do this. We have a net zero target by 2050. We are today facing an extraordinary situation. Russia is a huge country in terms of commodities. When you cut Russia out of the system financially and otherwise, that is going to be felt by significantly in other countries.” He added that ramifications are already being experienced. He said that “a full ESG transition worldwide would cost us two hundred trillion dollars, that is twice the volume of global GDP.” He warned that “we cannot have an advanced-economy solution to a world problem.”

Looking at Western European countries which are dependent mostly on Russian gas, he said they have to find a way to feel more comfortable with what they are going to do and North Africa will play a bigger role in terms of gas and electricity. There are “plans [since] ten years ago to build a massive solar farm in the Sahara. Those plans will come back. People will consider such plans, which ten years ago were considered to be outlandishly humongous.” He reiterated that “North Africa is in an excellent position to supply some of the security to Western Europe.”

Vallipuram predicted that countries like Qatar and Iran are possible “solutions to the problem by becoming larger suppliers, as gas is going to remain the transition fuel. There’s no other way around it.” He added, “there’s another issue we are having which we have to sort out in order to ensure the transition, which is the current production of lithium, cobalt, nickel, graphite all of them have to increase in multiples annually for the next thirty years, which means we have to spend an enormous amount of time on mining.”

However, he noted that “we are going to achieve ESG but we are going to do it more intelligently without increasing the immediate cost to people for energy use,” indicating that “right now, given the geopolitical situation, most of the focus will be on policymakers and how to bring down the cost of oil and gas.”

In an answer on whether Iran could be a solution to the energy challenge, he said it’s not a question of how much they can supply, but whether they can come to some conclusion with the existing outstanding issues among the US, the EU, and UN, and will that help the future oil prices to come down [in Iran] rather than seeing the supply going to the market.

He declared that the current crisis is showing policymakers that we have to go green and that there is no way around it, noting that in the near term, the focus will be on how the existing oil prices and gas prices can go down more than anything else: “But I am a huge fan of the Energy Saving Trust (EST) transition.”

Diplomats from Morocco, the USA, Turkey, Bangladesh, India, Germany, France, Egypt, Brunei Darussalam, Yemen, and others took part in the question and answers segment of the event.