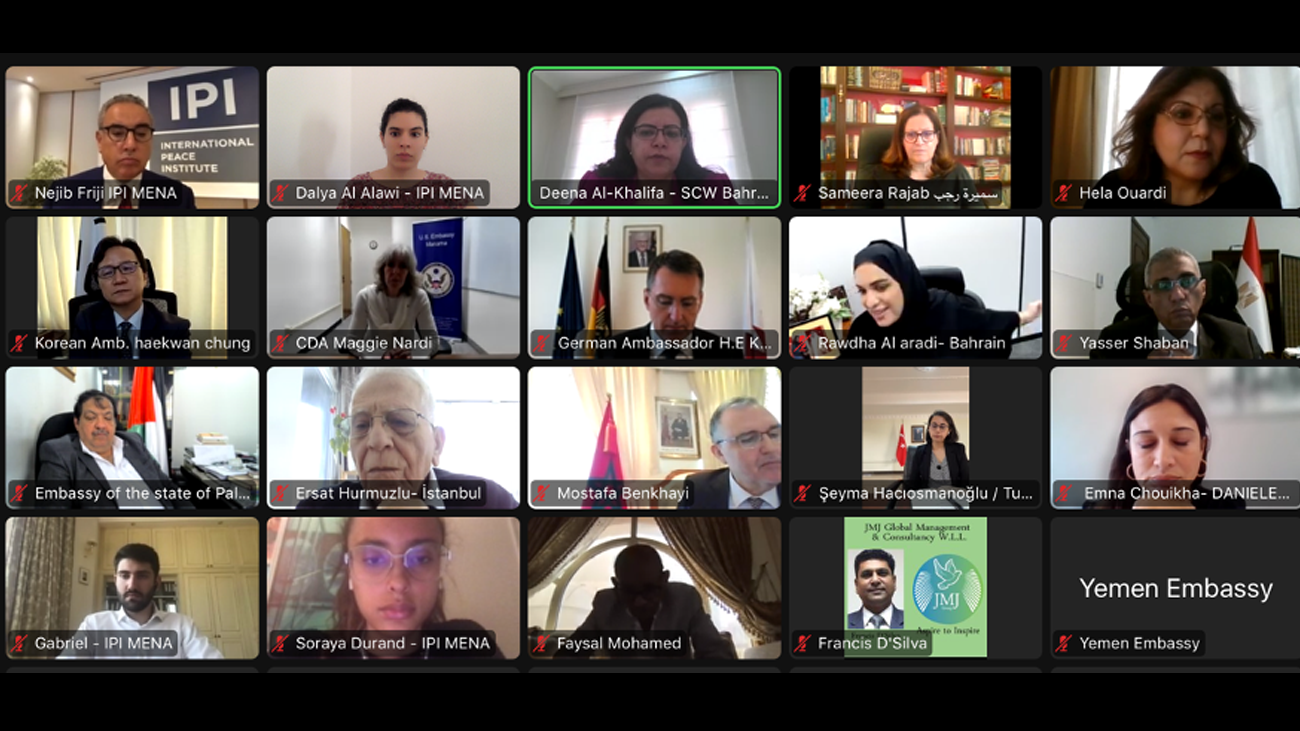 A panel of women experts and practitioners convened at an IPI MENA webinar on March 15 to elaborate on this year’s International Women’s Day theme of “Gender Equality Today for a Sustainable Tomorrow,” with a specific focus on the Middle East and North Africa region.

Delivering IPI MENA’s statement, IPI Policy Analyst Dalya Al-Alawi stressed the importance of government policy in materializing gender parity goals and the need to have legislative frameworks that support this, as women are the key to sustainable growth in the MENA region. She underlined other factors to consider including the role of civil society, the private sector, and education in promoting gender equality among youth.

In a video message addressed to IPI MENA webinar, H.E Sima Bahous, UN Women Executive Director emphasized the “Arab States Paradox.” She decried women’s limited access to political and economic life in Arab States despite women’s relatively high levels of education result in a “financial loss, intellectual loss and developmental loss.” She said that if tackled, these losses could result in powerful forces in development and progress.

“On the regional level, the Middle East is expected to be 4 degrees Celsius warmer in 2050, bearing heavy consequences in terms of heat stress, water scarcity with severe impacts on biodiversity and ecosystems requiring comprehensive, responsive measures,” she noted. “There is good potential in the Arab States to try to address climate change through women’s employment. That is because the percentage of women pursuing an education in STEM fields, which are uniquely important to climate change mitigation, is higher in the Middle East than in other regions.”

H.E Samira Rajab, Special Envoy to the Bahrain Royal Court pointed to the fields of technology and digitalization as important areas in supporting Arab women. She underlined the link between technological skills and economic independence for women, particularly in the current contexts of a global pandemic and the subsequent surge of online use, be it working from home, virtual finance and economic facilities, or online education.

“Developing this knowledge, skill and women’s empowerment have become a priority for sustainable human development plans, so that women remain active players and key development partners,” she stated.

Assistant Secretary General of Bahrain’s Supreme Council of Women, H.E Shaikha Deena bint Rashid Al-Khalifa, highlighted SCW’s mandate in developing a comprehensive national plan for the advancement of Bahraini women while ensuring it is aligned with the National Economic Vision 2030, the sustainable development agenda and most importantly the aspirations of Bahraini women and the significant accomplishments they have achieved. “We affirm Bahrain’s commitments to remaining steadfast to maintain the efforts and progress made so far,” she stated, “in advancing the role of women in development through targeted policies and initiatives that promote equal opportunities.”

Mrs. Hela Ouardi, author, member of the Belgian Academy and Professor at the University of Tunis, explored how women’s marginalized roles in history have resulted in “knowledge fragility”, which affected women in the MENA more severely. She noted that building sustainable peace in the region relies on deep reflection and work to rewrite history, not under male monopoly but with due and fair parity, with a focus on women’s contribution in knowledge building.  History references have side-lined the key roles played by women since pre-Islamic times to our days, she said, adding that achieving sustainable development and peace in this region and beyond cannot be done through political pledges and resolutions, but through encompassing all aspects of society where women play key roles as authors and actors.

Ms. Ouardi called for women’s leadership in re-owning and rewriting history to put an end to perception and stereotypes that kept women as silent or imprisoned victim. Reinstating the ignored roles of women in our history will reinforce their key and decisive roles in designing the future of our society, she said. She referred to Ibn Rushd (Avveroes), one of the 12th century most prominent Muslim thinkers who asserted that women can govern and run a state, while criticizing his generation’s view about women as being oppressive and unjust.

Mrs. Margaret Nardi, Chargé d’Affaires of the US Embassy highlighted the dialogue between her country and Bahrain and commended Bahrain on advancing women’s social issues, particularly with the recent laws enabling Bahraini women to pass residency rights to their children and foreign spouses.

German Ambassador H.E Kai Boeckmann drew encouraging parallels between Germany and Bahrain as leaders in gender parity initiatives and pointed to Germany’s engagement on the Commission on the Status of Women as one of the current four co-chairs. “Our new Foreign Minister Annalena Baerbock is now the first female foreign minister in Germany’s history,” he stated, while stressing Germany’s stronger commitments made by the new government. “When our new Foreign Minister presented the foreign policy agenda in our federal parliament, she explained a concept which in Germany and elsewhere has raised some eyebrows – the ‘feminist foreign policy’. What is meant by this concept is simple, it is about equal representation, rights and resources,” he said.

Opening the webinar, entitled “The Role of Women in the MENA Region in Building a Sustainable Tomorrow,” IPI MENA Director Nejib Friji called for greater solidarity to the women and girls across the world who are on the frontlines of wars and conflicts, in Ukraine, Iraq, Afghanistan, Palestine, Syria, Yemen and other zones of conflict.

“We find ourselves in a tumultuous moment in modern history where we are dealing with the repercussions of a global pandemic, the threats of climate change and wars – all which disproportionately affect women,” he stated. “Building a sustainable tomorrow begins with addressing the question on gender equality.”