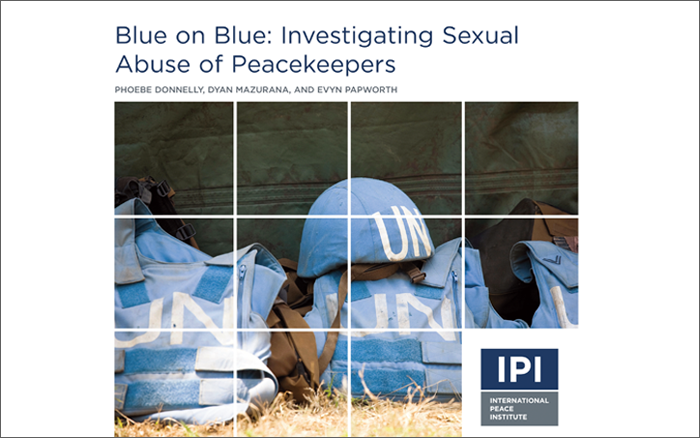 On April 11th, IPI together with the Elsie Initiative is cohosted a virtual policy forum entitled “Blue on Blue: Investigating Sexual Abuse of Peacekeepers.” This event launched the policy paper by Phoebe Donnelly of the International Peace Institute, Dyan Mazurana of Tufts University, and Evyn Papworth.

While addressing sexual exploitation and abuse (SEA) by UN peacekeepers has risen as a priority, alongside increasing military women’s participation in peacekeeping forces, there has been almost no attention to sexual abuse of peacekeepers. This study is among the first to investigate, document, and analyze sexual harassment, discrimination, and assault of women and men military and police peacekeepers serving in UN and African Union peacekeeping missions.

The authors gave a short presentation of the study’s findings and their recommendations. Panelists then discussed the research findings and challenges and opportunities for taking action to address sexual abuse against peacekeeping personnel. Panelists also connected the recommendations and general findings of the paper to their own work and discussed steps for implementation.

This event and the related research are part of the Women in Peace Operations (WIPO) project, a multi-year initiative of IPI’s Women, Peace, and Security program funded by the Government of Canada’s Elsie Initiative.