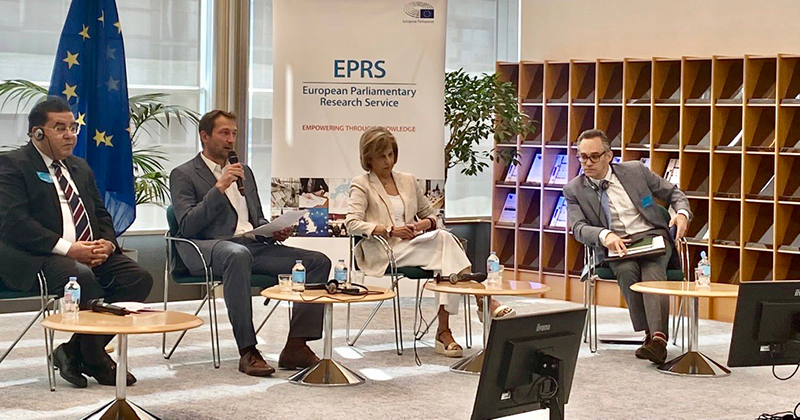 As clear evidence of war crimes and violations of international law have come to light in the war in Ukraine, the fight against impunity has garnered new attention. This is not just true for Ukraine but for the entire world. The task of reprioritizing the protection of civilians and human rights has become increasingly urgent.

To address this global challenge, the European Parliamentary Research Service in partnership with Fight Impunity and No Peace without Justice held its first International Annual Conference, entitled “The Future of Human Rights and the Fight Against Impunity.” The event took place at the European Parliament in Brussels from June 16-17, 2022, bringing together leading figures from the EU, UN, and NGOs. Throughout both days, participants aimed to shed light on abuses against human rights, foster a better-informed public debate on the subject, and help generate a stronger commitment to prioritize it with international resources.

IPI Vice President and COO Adam Lupel participated as a speaker at the conference’s fourth session on “Threats to Peace and Democracy.” His presentation examined the fragmentation of international order, the crisis of multilateralism, and the overall weakening of commitments to international law. Commenting on the atrocities taking place in Ukraine, Dr. Lupel said: “The principles of non-aggression, inviolability of state borders, and limitations on the use of force…are under threat by the Russian aggression in Ukraine. Without adherence to these basic norms, you lose the very conditions for the possibility for the international rule of law.”

In addition to Dr. Lupel, the panel featured remarks by Nadia Volkova, Founder & Director of the Ukrianian Legal Advisory Group; Ayman Nour, former member of the Egyptian Parliament and Presidential Candidate; and Shada Islam, Visiting Professor, College of Europe. The panel was moderated by MEP Christophe Hansen, Member of the European Parliament for Luxembourg.