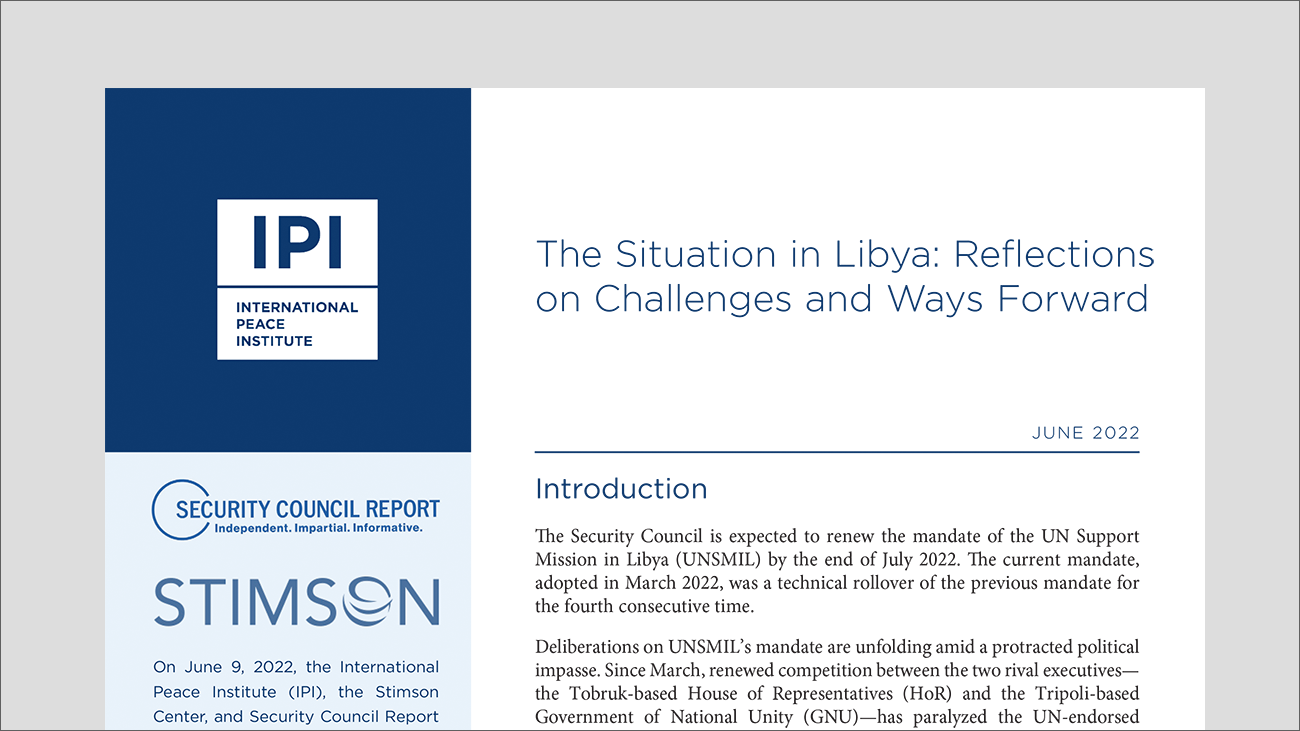 The UN Security Council is expected to renew the mandate of the UN Support Mission in Libya (UNSMIL) by the end of July 2022. Deliberations on UNSMIL’s mandate are unfolding amid a protracted political impasse. Since March, renewed competition between the two rival executives has paralyzed the UN-endorsed framework that emerged from the Libyan Political Dialogue Forum. This competition among elites has also drawn attention away from the underlying drivers of violence and insecurity and caused the political, security, economic, and human rights situations to deteriorate.

In this context, the International Peace Institute (IPI), the Stimson Center, and Security Council Report co-hosted a virtual roundtable discussion on June 9, 2022. This roundtable offered a platform for member states, UN stakeholders, civil society representatives, and independent experts to share their assessments of the situation in Libya in a frank and collaborative environment. The discussion was intended to help the Security Council make more informed decisions with respect to the prioritization and sequencing of UNSMIL’s mandate and the mission’s strategic orientation and actions on the ground.

Participants agreed that the UN continues to be an important partner to Libya and that UNSMIL’s mandate is broad and flexible enough to enable continued engagement. Nonetheless, it will be essential for the UN Security Council and UNSMIL to recalibrate international support to the country in the coming months. To this end, participants urged the UN to leverage its role as an impartial actor that can increase cohesion among the various dialogue initiatives, hold stakeholders accountable, and sustain engagement with civil society groups. Participants also identified the need for the UN to develop and implement a more holistic approach to its mandate by focusing more on economic issues and mainstreaming human rights across all processes. Further, participants noted that UNSMIL needs to effectively communicate its strategy and priorities, including its desired “end state.” Finally, participants urged both the Security Council to remain unified and continue prioritizing Libya and member states to ensure that their actions are consistent with their stated positions.