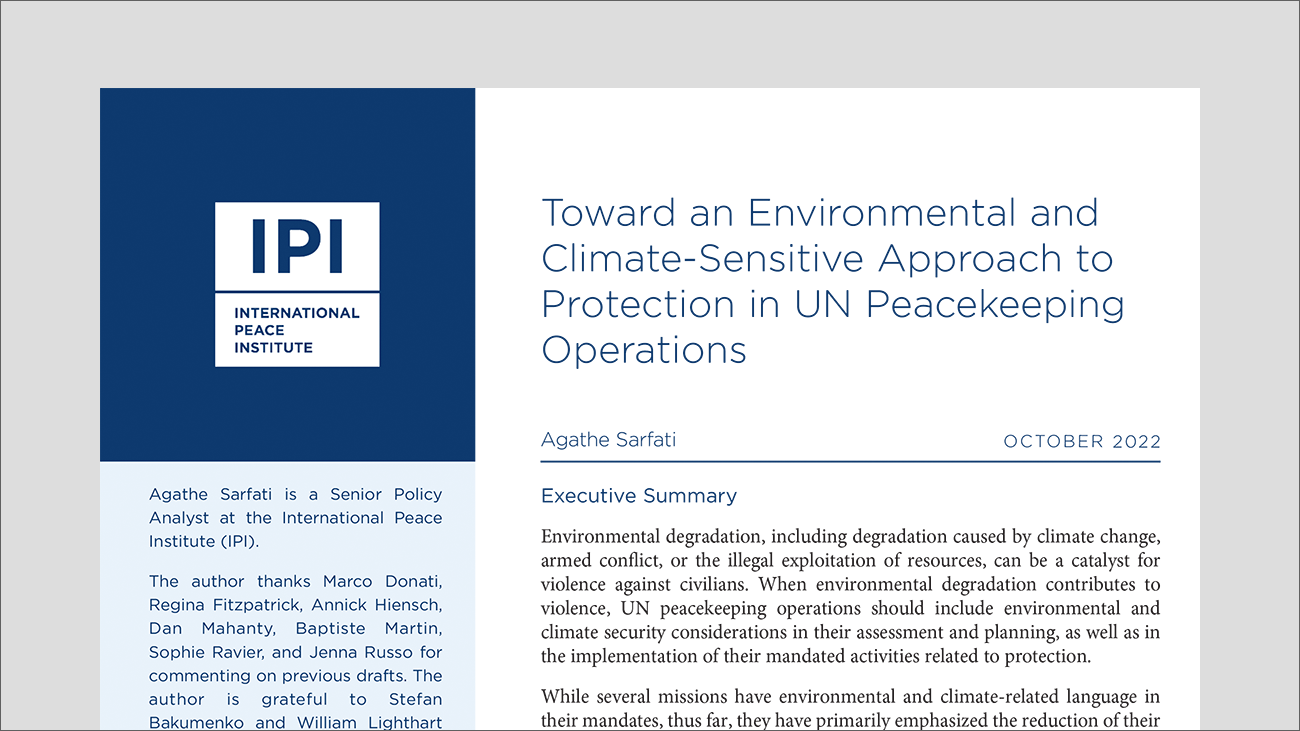 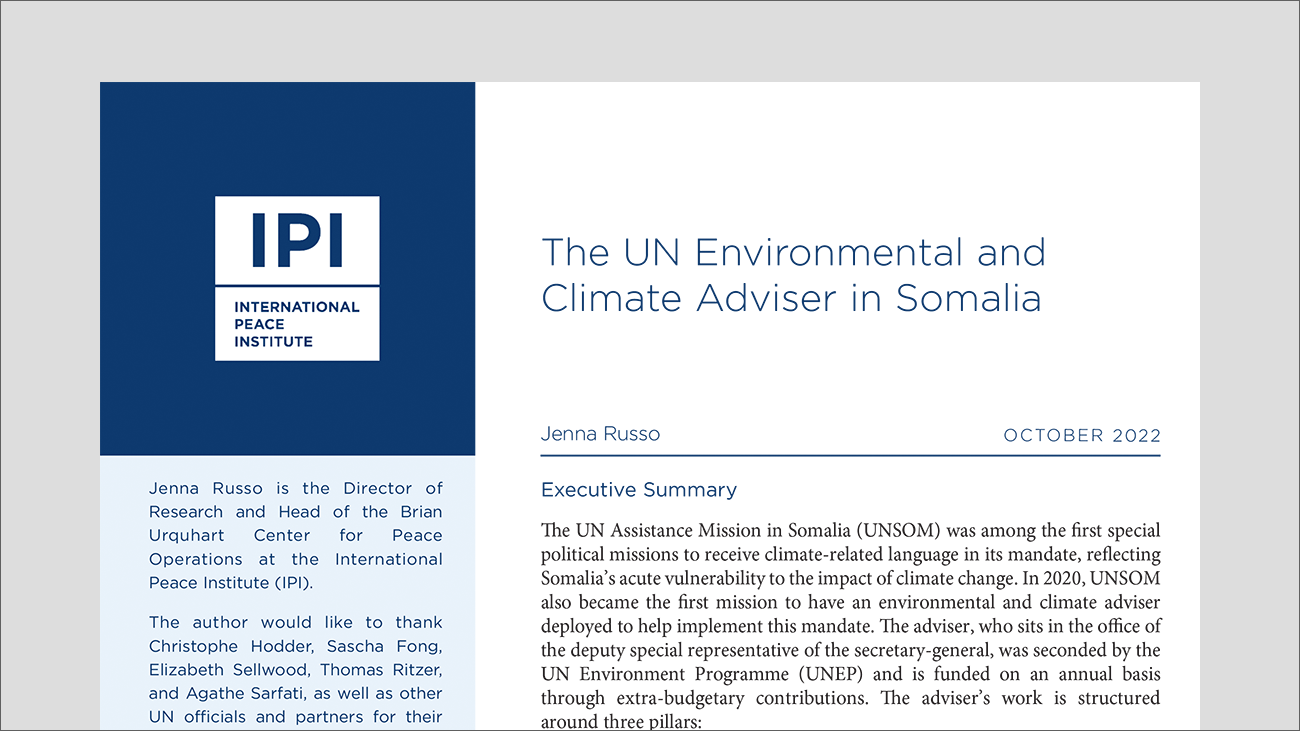 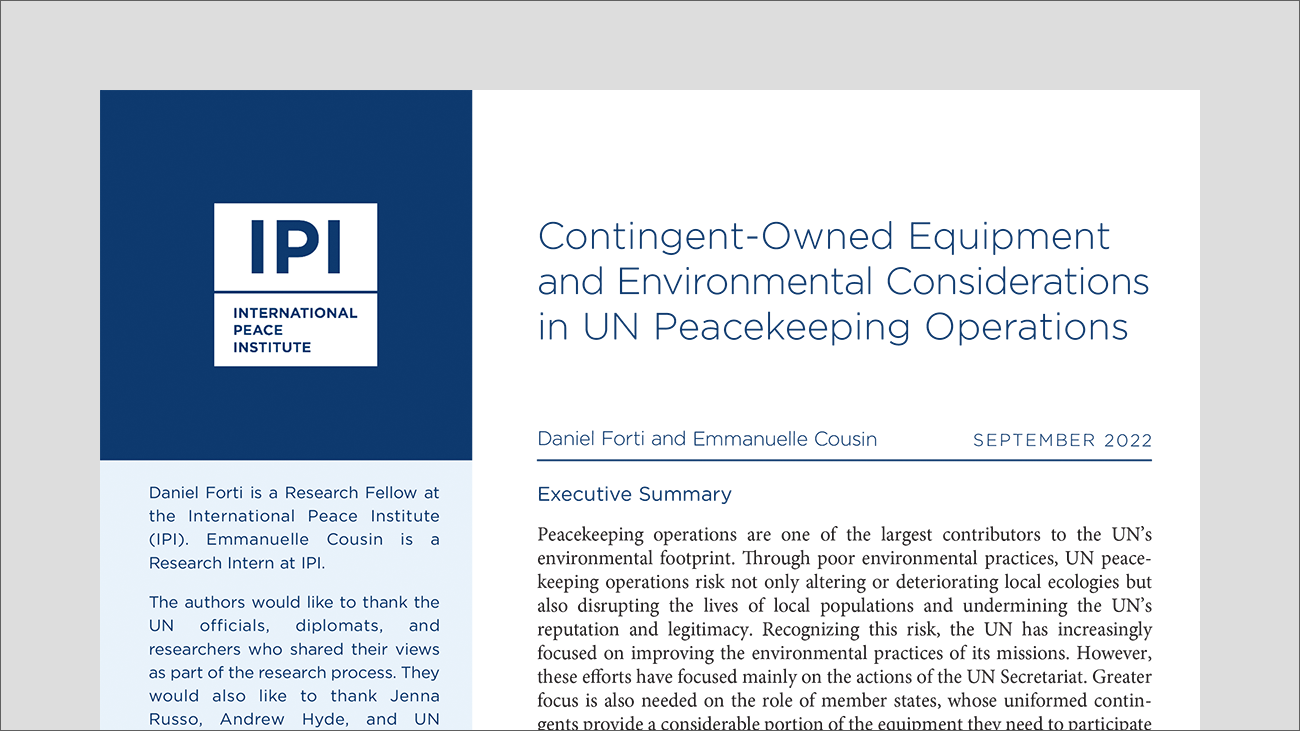 IPI, in partnership with the French Ministry of Armed Forces and the Sasakawa Peace Foundation, cohosted the 2022 Peacekeeping Observatory Annual Workshop on October 18, 2022. The half-day workshop explored the interconnected nature of climate change, peace, and security within the context of UN peace operations. The hybrid event convened over sixty-five participants, including UN personnel, member-state representatives, and independent experts from civil society organizations.

Throughout three sessions, discussions examined the substantive and operational implications of this intersection, specifically focusing on: (1) achieving sustained peace through environmental peacebuilding and climate responses; (2) integrating climate analysis into the mandated activities of UN peacekeeping operations; and (3) mitigating the environmental footprint of UN peace operations and the impact of climate change on mission operations.

The first session highlighted the importance of considering environmental issues, including climate change, in efforts to sustain peace. However, the way to integrate these considerations into multilateral and national policy agendas remains contested. Connections could be made more organically at the local level. Localized assessments of climate-related impacts were identified as pivotal to inform adequate climate responses to sustain peace, along with awareness-raising and the inclusion of local voices. It was noted that these would benefit from governmental buy-in and the support of intergovernmental initiatives, including climate financing.

The second session examined how UN peace operations could integrate climate-related considerations into their strategic planning and mandated activities. Participants discussed whether current mandates and existing UN Security Council resolutions provide sufficient entry points in this regard. They also highlighted the importance of managing expectations and emphasized the need for partnership with the UN country team. Emerging initiatives undertaken by the Department of Peace Operations (DPO) were underlined, including its participation in the Climate Security Mechanism (CSM) and the deployment of environmental and climate security advisers. These were noted as the first steps to mainstream climate and environmental considerations in missions’ work, but they still require financial and political support to develop a holistic climate-sensitive approach to peacekeeping.

The third session reviewed UN peace operations’ efforts to reduce their environmental footprint. Participants discussed the significant progress missions have made under the “greening the blue” initiative but acknowledged there is still room to increase the use of renewable energy and achieve the UN Secretariat’s 2030 emissions-reduction goals. As missions seek to ensure a “positive legacy” when they exit, participants agreed that they can play a more prominent role in providing host communities with basic and sustainable sources of energy with the support of the private sector. Finally, the impact of climate change on missions’ capacity to operate and their need to adapt was discussed.

The Peacekeeping Observatory is a multiyear IPI project examining emerging issues and challenges in peace operations. It is funded by the French Ministry of Armed Forces. This year, the theme of the project is “Climate Change, Peace, and Security: What Role for UN Peace Operations?” IPI plans to focus on the topic of new technologies in peace operations for the 2023 cycle of the Peacekeeping Observatory project.