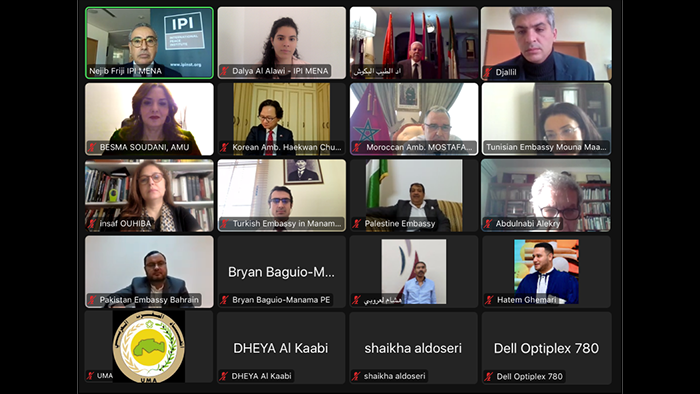 Regional heads, academics, and key players called on governments and regional actors to further boost efforts for greater regional cooperation and integration through key sectors; education, women’s participation, and the prevention of violent extremism through youth.

The December 8th webinar entitled “Challenges of Integration in the Maghreb Region,” was opened by IPI MENA Senior Director Nejib Friji, who stressed that education in particular plays a large part in the success of collaboration and cooperation on a regional level.

“Focusing on education as a tool for peace, cross-border student exchanges, creating a culture of peace through education – all of this is necessary to build resilient societies and prevent violent extremism through youth,” he underlined.

Key speaker H.E Taieb Baccouche, Secretary General of the Arab Maghreb Union (AMU) and former Education Minister of Tunisia, emphasized that various challenges in the region lie in its economic, education, and security disintegration and questioned whether the links between the North and South of the Mediterranean can remove the legacy of colonialist hegemonism to establish new egalitarian relations on the path towards economic integration.

Focusing on the education sphere, Mr. Baccouche noted that there is a critical issue of language in the Maghreb region.

Due to an absence of strategic policies, differing educational levels jump from Arabic, French, and even English as the language of study, causing confusion and a lack of consistency for students. This is a fundamental issue impacting education levels as it makes student and academic cross-border exchanges difficult and negatively impacts school dropout rates.

Pointing to the role of AMU in providing frameworks for integration, discussant Ms. Besma Soudani, Chief of Staff and Director of Political Affairs and Information, AMU, noted the collaboration and cooperation at both the Maghreb and African levels on peace and security issues and the regular ministerial meetings to solve various issues including illegal migration, terrorism, organized crime, cybercrime, trafficking in narcotic drugs and civil protection.

Ms. Soudani also emphasized the role of women and the need to introduce a multidisciplinary scientific research approach, focused on gender, to allow for a deeper and more complete understanding of the phenomenon of the feminization of “jihadism.” She referred to AMU’s first ministerial meeting of the Ministers of Women, Family and Childhood in the Maghreb in 2018 as an example.

“It recommended the creation of a joint Maghreb mechanism for cooperation, exchange of expertise and experience, and support for Maghreb women’s networks,” she said, underlining the key outputs of the meeting, “and it called on all national, regional and international institutions and all components of civil society and political parties to work more to embody women’s human rights in reality and to activate their roles in maintaining security, peace, stability, and development.”

Focusing on the prevention of violent extremism as a component of regional integration, discussant Professor Djallil Lounnas, Associate Professor in Political Science, School of Humanities and Social Sciences at Al-Akhawayn University in Morocco, noted that of the approximate 20,000 Jihadist foreign fighters that went to Syria-Iraq between 2011-2015, over 7,000 of them were from the Maghreb.

Professor Lounnas referred to the strategy of Moussalaha (reconciliation) put in place by Algeria, Morocco, and Tunisia to address the issue of foreign fighters returning to their home countries.

“Moussalah is a legal religious concept in Islam,” he explained, “by which parties in conflict may renounce, by mutual agreement, punishment and legal consequence for a crime for long-term conciliation.”

He highlighted the three strategies across three case studies; the focus on demobilization and peace in Algeria, the emphasis on deradicalization through volunteer schemes in Morocco, and the cost of the lack of strategy implementation in Tunisia due to a lack of financial and human resources.

In answer to a question posed by Mr. Friji during the question-and-answer segment on the importance of civil society, academics, and institutions in facilitating integration, Mr. Baccouche pointed to the financial and banking sector in developing start-ups for youth and students to build resilient societies.

“The process of integration is not easy,” he noted. “But we are relentless in our efforts, and we continue to overcome the objectives of cementing unity and integration of the Maghreb Union.” He called on an IPI – AMU cooperation to focus on specific sectors to tackle in-depth elements of integration.

Ms. Soudani emphasized the role of women in civil society as well as sports and pointed to the 2022 World Cup as an example of unity in the Middle East and North Africa, despite varying differences. “We must not think short-term, we must also ensure sustainability and incorporate activities on youth, sport, and scientific research to unify the Maghreb region,” she stressed.

Mr. Friji concluded the webinar by calling on academics, institutions, research organizations, and think tanks to focus on the different challenges facing the Maghreb region. “Let’s make 2023 the year to materialize the research and move from think-tanking to do-tanking and involve the Sub-Saharan and Mediterranean dimensions.”

Diplomats from Korea, Morocco, Pakistan, Palestine, the Philippines, Tunisia, and Turkey, as well as academics and journalists from Bahrain, and representatives of various institutions in the MENA region took part in the webinar.