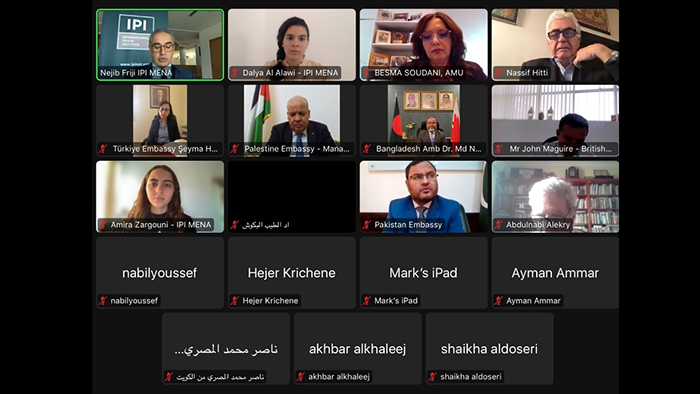 In a webinar organized on December 6th by IPI MENA, top diplomats and high-level experts called for greater regional integration in the Middle East and North Africa (MENA) through the engagement and participation of youth to address the ongoing transformative factors and challenges the region is facing.

The webinar, entitled “Structural Challenges & Transformative Factors in the MENA Region,” was opened by IPI MENA Senior Director Nejib Friji, who stressed the need for a homegrown solution to the regional issues, and pointed to the opportunities provided by the movement of people, goods, and capital to stimulate greater cooperation and build resilient societies.

“Regional integration is the outcome of wider democratization processes,” he said, “which often links with values such as peace, security, sustainable development, and respect of human rights – as it encourages the melding of countries’ political, economic, and social domains.”

Key speaker H.E Nassif Hitti, former Foreign Minister of Lebanon, warned about the region’s “disordered order” which can lead to the emergence of non-state actors interfering with and eroding inter-state relations by de-territorializing political actions and encouraging transnational anarchical movements. “The proliferation of failing states also creates sub-national identities and a new sense of belonging,” he stated, which can threaten citizen-state relations.

He urged for the establishment of a social contract between states and societies while reminding the audience: “We need to take into account the growing youth demographic in the region which has great potential and could become a source of progress and development if well managed, or it could become an issue of instability if mismanaged.”

Mr. Hitti also stressed the need for a security structure in the region that would be fit for purpose for present-day challenges and would complement the region’s complex architecture, without replacing the existing regional frameworks of the GCC and Arab Maghreb Union.

“We had the Baghdad Conference for Cooperation and Partnership on August 28th, 2021, and the second conference is expected to be held at the end of this year,” he noted. “It is a good step to set the motion for creating a sort of Helsinki process in the region. We have differences but we are here to act as states and to de-escalate tensions and ensure cooperation to move forward.”

Pointing to the many crises in the region, discussant Ms. Besma Soudani, Chief of Staff and Director of Political Affairs and Information of the Arab Maghreb Union (AMU), noted that despite the instability, the numerous geopolitical dimensions of the Maghreb region; its African, Asian, sub-Saharan, and Mediterranean dimensions, provide vast opportunities for cooperation.

“To integrate, AMU member states must remove barriers to trade and investment and connect their infrastructure networks,” she stressed. “The progressive elimination of barriers to interregional trade, the construction of regional infrastructure, and the improvement of the business environment would stimulate trade within the Maghreb and contribute to further integration into global value chains.”

She called on civil society and the private sector to play a greater role in ensuring greater cooperation and integration in the region, be it via ICT and digital communication enhancement, or investing in and boosting agriculture to ensure greater food security.

Diplomats from Bangladesh, Kuwait, Morocco, Pakistan, Palestine, and Türkiye as well as academics and journalists from Bahrain, and representatives of various institutions in the region took part in the webinar.