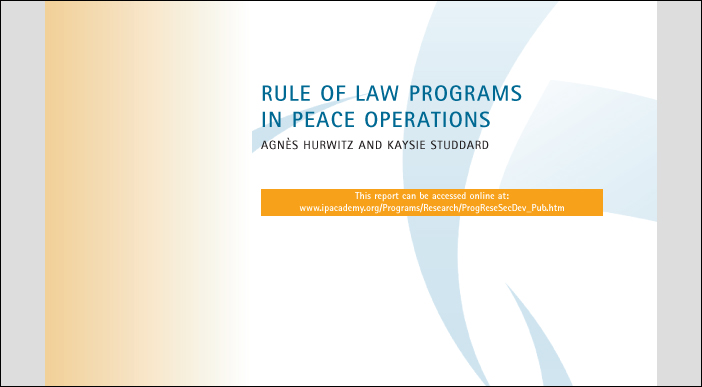 The International Peace Institute held a conference on 29 October 2004 on Rule of Law Programs in Peace Operations: Toward a Conflict-Sensitive Perspective.

The international conference brought together policymakers, practitioners and academics to discuss the effectiveness and long-term sustainability of current programs, and in particular their actual impact in different phases of conflict, with a view to distilling recommendations for improved rule of law and conflict management policy and practice. This conference sought to expand on some of the issues which were presented in the 2004 UN Secretary-General’s report on The Rule of Law and Transitional Justice in Conflict and Postconflict Societies.

Since the IPA Conference, major policy developments have taken place that are of critical import to the UN and international community. In March 2005, the UN Secretary-General, encouraged by the 2004 UN report of the High Level Panel on Threats, Challenges and Change, released In Larger Freedom: towards development, security and human rights for all, where important proposals were put on the table for reforming the UN system as a whole. The report included key recommendations that are particularly relevant for the rule of law, by recognizing its significance in peacebuilding and calling for the creation of a rule of law unit to be housed within the proposed Peacebuilding Commission. In anticipation of the UN Summit in September 2005, this IPA Policy Report seeks to integrate these recent developments into discussions that are currently taking place and which can play a major role in strengthening rule of law policy and practice.