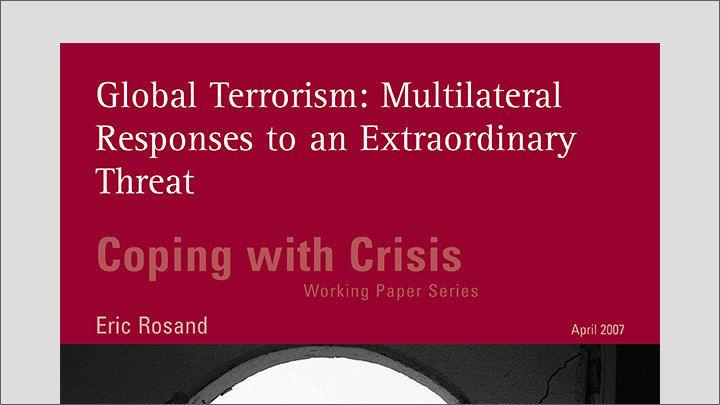 From the Introduction: Although terrorism as a phenomenon is not new, with the upsurge in terrorist attacks around the world claimed by or ascribed to Islamist terrorist groups, there is now recognition, even among the most economically and militarily powerful of countries, that this particular threat cannot be fought by a single state or even a group of states. As a result, even as countries increasingly understand the indirect economic impacts of terrorist attacks and terrorist exploitation of weaknesses in governance or financial infrastructure, very different perceptions of the threat posed by terrorism have emerged. This has complicated efforts to develop coherent international responses to the—by definition—extraordinary threat posed by terrorism.

In this Coping with Crisis Working Paper, I focus on the status—and prospects—of multilateral responses to global terrorism. First, I briefly review what is known, and perceived, about the nature of the “extraordinary” threat posed by contemporary international terrorism to international peace and security. Second, I discuss current efforts directed at managing this threat, focusing on initiatives in the multilateral realm. And finally, third, I point to possible scenarios for the future development of a more coordinated and coherent international response to terrorism, and on the basis of these scenarios I make a number of policy recommendations.