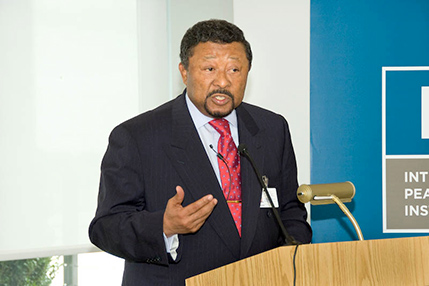 On September 19, 2008, H.E. Mr. Jean Ping, Chairperson of the African Union Commission, addressed a group of diplomats and other members of the United Nations and NGO communities in IPI’s Trygve Lie Center.

Mr. Ping spoke at length about the future of the AU, reminding those present that it has achieved much in just six years of existence, but cautioned that much remains to be done on the continent. Noting the encouraging signs of peace and security in Africa, which are often underreported, Mr. Ping said that “thinking must be followed by action,” in order to achieve progress and maintain credibility on the international stage. He added, “there can be no lasting peace without development–economic development.”

He highlighted the ways in which the AU is working to promote development and foster lasting peace in Africa, including such capacity-building measures as incorporating the New Partnership for Africa’s Development (NEPAD) into the AU to facilitate economic development; the creation of the African Standby force by the AU and African Chiefs of Defense Staff; and the close monitoring of elections to ensure transparency and fair play.

Mr. Ping was president of the fifty-ninth session of the United Nations General Assembly, and was Ministre d’Etat, Minister for Foreign Affairs, Cooperation, and la Francophonie of the Gabonese Republic from 1999 until earlier this year. A career diplomat, Mr. Ping began his professional life at the United Nations Educational, Scientific and Cultural Organization (UNESCO) in Paris.

The well-attended event was part of IPI’s African Leaders Series, which provides a platform for African leaders to reach out to the UN community in New York.