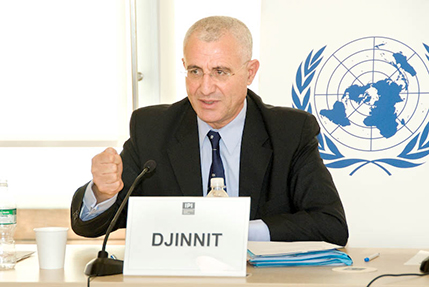 On the morning of Monday, September 22, 2008, IPI hosted a breakfast Policy Forum on “Crime as an Impediment to Security and Development in Africa.” The meeting, chaired by IPI President Terje Rød-Larsen and UNODC Executive Director Antonio Maria Costa, considered the ways in which local and transnational crime in Africa represents both a cause and a consequence of violence, corruption, and poor governance, and the strategies that international institutions can adopt to arrest this cycle. The meeting was an official Side Event to the UN General Assembly’s High Level Meeting on Africa’s Development Needs.

After opening remarks by Mr. Rød-Larsen and Mr. Costa, a presentation was made by Ambassador Said Djinnit, Special Representative of the UN Secretary-General for West Africa. Reviewing the increasing impact of drug trafficking in West Africa and other forms of trafficking throughout the African continent, Ambassador Djinnit stressed the need to understand that crime was increasingly correlated to deteriorations in national and human security. He called for a reassessment of the importance of efforts to fight crime, and a more strategic, integrated, and collaborative approach from international institutions.

Discussing Ambassador Djinnit’s remarks, Ambassador Amina Salum Ali, the Permanent Representative to the African Union’s Mission to the United States, emphasized the important role that the African Union has to play in efforts to build regional capacity to fight crime throughout the region. She noted that while crime is having increasing impacts on security throughout the region, it is important also to address its social repercussions. Ambassador Ali called for increased support to the African Union to underpin collaborative efforts to deal with the local, national, subregional, and regional aspects of this problem..

Comments on Ambassador Djinnit’s remarks were also provided by Mr. Patrick Hayford of the Office of the Special Adviser on Africa at the United Nations. Like the previous speakers, Mr. Hayford called for increased effort by the international community to arrest the impact of transnational trafficking cartels on the region. He emphasized that while international institutions, including the regional economic commissions, African Union, and United Nations, have an opportunity to build on these positive trends, leadership must come from within Africa. Recalling numerous cases where Africans have overcome enormous odds, he ended the formal presentations on a positive note, suggesting that he was very optimistic about Africa’s chances in what promised to be a long struggle with crime..

A session of questions and answers followed, discussing the role of INTERPOL in assisting African states to build national capacity to fight organized crime; the role of policing and the need for increased international support to develop African police capacity; and the need for a victim-centered approach to confronting crime.

HE Ms. Amina Salum Ali,
the Permanent Representative to the African Union’s Mission to the United States