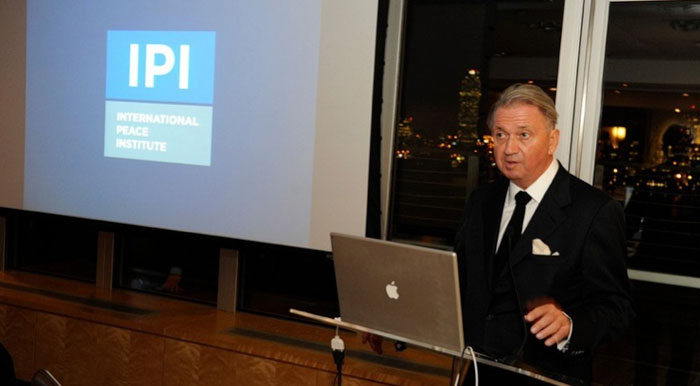 Egyptians remain cautiously optimistic about their future, but their concern about the economy and stability is up sharply, a new poll has found.

The Egypt poll was made public September 19th at the International Peace Institute by President Terje Rød-Larsen at its annual Foreign Ministers’ Dinner on the Middle East.

The working dinner was attended by some thirty foreign ministers and other high-level representatives from the Middle East, Europe and beyond. It was co-chaired by IPI President Terje Rød-Larsen; Sheikh Abdullah Bin Zayed Al Nahyan, the Minister for Foreign Affairs of the United Arab Emirates; and Jean Asselborn, the Deputy Prime Minister and Minister for Foreign Affairs of Luxembourg.

Other attendees were the Prime Minister of Qatar; the Deputy Prime Minister of Kuwait; Foreign Ministers of Bahrain, Cyprus, Egypt, Finland, France, Germany, Greece, Jordan, Morocco, Norway, Portugal, Spain, Sweden, Turkey, and the United Kingdom; the Secretary-General of the Council of Europe; the Deputy Secretary of State of the US; the High Representative of the European Union for Foreign Affairs and Security Policy.

According to the poll, the proportion of Egyptians who feel their country is headed in the right direction has dropped to 50%, while 42% say the country is going the wrong way. In March, soon after the revolution, 82% were positive on the country’s direction, an IPI poll found.

These views reflect growing worry about the economy, almost two-thirds citing it as the country’s main problem, double the share that did in March. Next come concerns over protests and instability, cited by 15%, and rising crime, mentioned by 11%.

Egyptians now say they are worse off economically and feel less secure than under former president Hosni Mubarak. In these circumstances, the majority say the country’s ongoing protests are unnecessary disruptions.

“Egyptians value their new freedom but are anxious about the price they are paying in financial and physical security,” commented Mr. Roed-Larsen on the poll findings. “The moderate majority wants stability and economic recovery.”

In spite of growing tension between the Egyptian and Israeli government, a large majority of Egypt’s public–71%–want to keep Egypt’s peace treaty and diplomatic relations with Israel, while 24 % favor breaking the treaty, ending relations, and returning to a state of war. Of those, 10 % would keep the treaty if a two-state solution is reached between Israelis and Palestinians.

The poll was taken prior to the Israeli army’s shooting of Egyptian police in the Sinai and the subsequent attack of the Israeli Embassy in Cairo by protesters. However, pollster Craig Charney, who took the poll, says, “The proportion in favor of the treaty is so large that the recent controversy is unlikely to have eroded it much. A mob of protesting militants may have looked scary on TV, but they don’t represent most Egyptians.”

Egyptians views of some of their other neighbors are however in decline. They are unfavorable to Syrian president Bashar al-Assad by a seven to one margin. Egyptians have also turned against the Hamas movement by three to two, while in 2009 they were favorable. This is in converse to the Egyptian government’s relations with Hamas, which have improved considerable since Mubarak’s ousting. Hezbollah is also rejected by Egyptians by almost two to one, another u-turn from a 2008 poll.

The former Foreign Minister and Arab League Secretary-General Amr Moussa still holds a sizable lead for the Presidency, with 28% of the vote, more than double the support of his closest potential rivals, Prime Minister Essam Sharaf (12%) and military leader Mohammed Tantawi (7%). However, vote shares for all are down slightly since IPI’s last poll in June. Consistent with that study’s findings, Mohamed El Baradei, former head of the International Atomic Energy Agency, trails behind at 2%.

Party support for the parliamentary elections planned to begin in late November is fragmented and low, reflecting the uncertainly created by a vast increase in the number of parties. The proportion of Egyptians who say they don’t know which party they will vote for has doubled from 34% to 67% since March, as more than two dozen new parties have joined those existing already under the Mubarak regime.

No party at present gets more than 3% of the vote, a sharp drop from IPI’s prior polls. “This is very unusual–normally the number of don’t knows goes down and party supporters goes up as elections approach and people make up their minds,” says Mr. Charney. “At the same time, there’s currently no sign of the so-called ‘green tide’ or wave of support for the Muslim Brotherhood and Salafists that has been widely expected.”

As the economic situation has darkened, Egyptians have grown anxious and are looking for help from the state. 76% prefer protecting jobs through state control, reversing privatization and subsidies, while under 22% favor job creation through free markets, foreign trade and investment, and aid to the poor. When it comes to international economic relationships, 57% think that the wealthy Arab states should be Egypt’s most important economic partners, while 20 % prefer rising economic powers like China and India and just 16 % the West. However, Egyptians will take help from any source: 60% favor closer ties to the developed West.

The nationwide poll was conducted in Egypt with 800 face-to-face interviews between August 8th and 15th by Charney Research, a New York polling firm. The margin of sampling error is 3.5%.