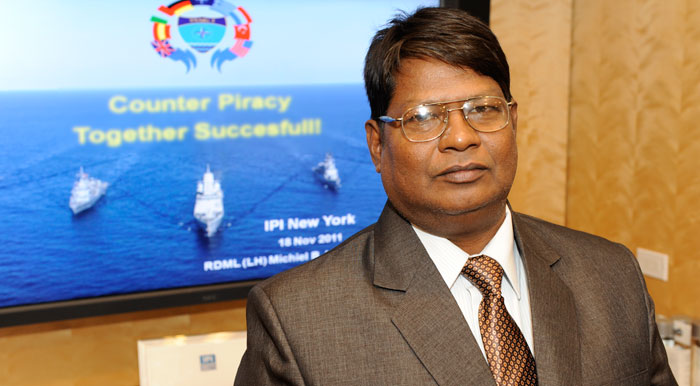 “We have to prevent hijacking of ships at all costs,” Mahadeo Makane, himself a victim of such an attack, told an IPI audience on November 18th.

Mr. Makane, the former Master of the ship Marida Marguerite, spoke on the treatment by pirates of hostages, recounting his own horrific experience, when his ship was captured and he was kept chained and in isolation for twenty-one days.

He was speaking at a two-session IPI policy forum entitled, “Fighting Piracy off the Coast of Somalia: International Cooperation and Challenges Ahead,” co-hosted by IPI and the government of the Netherlands. “No one is aware of the ground situation, what is happening in Somalia, what the pirates are doing, how they are treating the seafarers,” he said. “Right now, the focus is not on the seafarer; the owner is looking from his perspective, ‘this is going to cost me more money.’ But what about the lives of the seafarers? So many seafarers have been killed.”

Henk Swarttouw, Chairman of the Contact Group on Piracy of the Coast of Somalia, opened the discussion by providing a detailed outline of the group’s mission, mandate, and framework. “What we aim to do, is to give others… facilitate their delivery of counter-piracy measures in all their aspects,” he said. This includes support for the military, judicial systems, and law enforcement, the shipping industry, capacity building programs in the region, and giving support to flag states and coastal states.

Michiel Hijmans, who served from June 2010-2011 as the Commanding Officer of the Standing NATO Maritime Group 2, conducting NATO’s Operation Ocean Shield in the Indian Ocean, spoke about the wider importance of tackling the issue. As ninety percent of world trade occurs by sea, he said, “piracy hurts all of us, not only because of the humanitarian tragedy, but also because it is destabilizing in the region, and it is bad for the economy.”

Pointing out that piracy is connected to large transnational, organized crime, he praised the international cooperation to tackle piracy, crediting it for the dramatic decrease in successful hijackings, particularly of ships in convoys. “A lot of countries are together in this area,” which he noted was twice the size of Europe.

There is, however, still a lot more work to be done he said, as attempted attacks continue to increase. Arguing that vast capacity building is required, along with the patience to do it, he explained, “Capacity building is not something you do overnight.” Wayne Miller, Media Consultant to the UN Office on Drugs and Crime Counter-Piracy Programme, has spent much of the last year in Somalia speaking to a range of people in Puntland region for UNODC’s Anti-Piracy Advocacy Campaign. He underscored the importance of tackling the root causes of piracy, and the need to provide alternative livelihoods. “What we are looking at in terms of economic development, and visioning for the future, whilst I am very keen on my own project…unless there is alternative livelihood opportunities for the people of Puntland, I might as well give up, now,” he said.

He added, “At the end of the day, people need money to live on, and they need food. And, I think they also need a bit of self-respect in terms of having a job and having something to do. At the moment, there is very little there.”

The other presenters were: Peter Cook, Founder of the Security Association for the Maritime Industry (SAMI) and Chairman of the Maritime Security Review; Christopher Holtby, Outgoing Chairman of Working Group 1 of the Contact Group; and Peter Van Osselaer, Judicial Police Commissioner from Belgium.