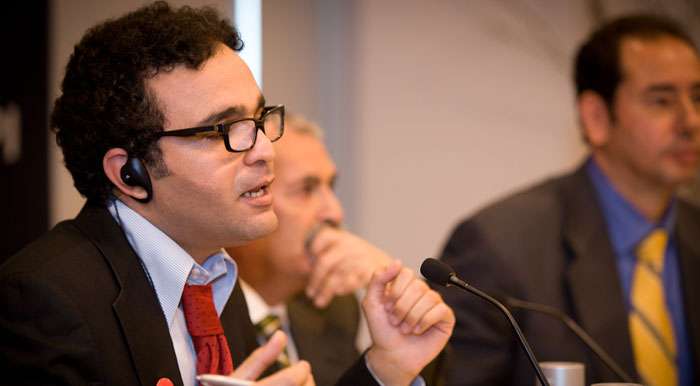 “We were the unknown soldiers who were moving and controlling the opposition,” Kamel Riahi, an award-winning Tunisian novelist and critic of the previous regime, said at an IPI event while reflecting on the role of intellectuals in the Tunisian revolution. “Their voices may have grown dimmer after the revolution, but, for the revolution, they were decisive, they were suicidal in their confrontation of authority,” he said.

Speaking alongside Mr. Riahi at the November 16th Arab Intellectuals Series event was bestselling Egyptian novelist Khaled Al-Khamissi, whose work focuses on social ills and political repression in Egypt. Putting the Egyptian uprising in larger context, Mr. Al-Khamissi said that the 2005 parliamentary elections—perceived as heavily rigged—marked a pivotal turning point. “We have experienced a complete cultural revolution that came in tandem with what we would qualify as a revolution, i.e., protest movements inside specific social circles. This slowly and gradually culminated, and is still continuing.”

Previously, he said, intellectuals had been tamed by Hosni Mubarak’s regime. “These intellectuals were basically a bunch of chickens, put in a chicken coop, and the political regime just had to feed these chickens and keep them happy and nobody was the wiser.” Now, he said, “These chickens have disappeared.”

Mr. Al-Khamissi also warned that the outcome of the revolutions has yet to be determined. “It is extremely dangerous to imagine that what is happening today in Egypt, Tunisia, or in other states in the Arab world, is the final chapter,” he said. “Rather, we are writing the first letters of the first words of the introduction; we have not even started with the first chapter. This is an introduction that we have come a long way in writing.”

In Egypt, Mr. Al-Khamissi said, it was a threat to financial interests and the possible emergence of organized revolutionary figures or parties, rather than benevolence, that guided the Army to drop their support of then-President Mubarak in February. Since then, he said, “eighty percent of Egyptians find this period as a very bad period.”

“The Tunisia situation is completely different,” said Mr. Riahi. “The Tunisian army is almost a civilian army. It’s a completely neutral institution, and in the revolution, it was no longer neutral. Rather, it took the side of the people.”

However, if extremists were to subvert the democratic process, Mr. Riahi said, “We are ready to go back to the streets and face any maneuver to go around our revolution.” He quoted from Abu al-Qasim al-Shabi’s poetry: “ ‘If the people ever want life one day, then destiny shall respond’,” adding, “And destiny shall respond to the Tunisian people through those we have elected, or through others.”

The event was moderated by Abdullah Alsaidi, IPI Senior Fellow and the former Ambassador of Yemen to the United Nations.