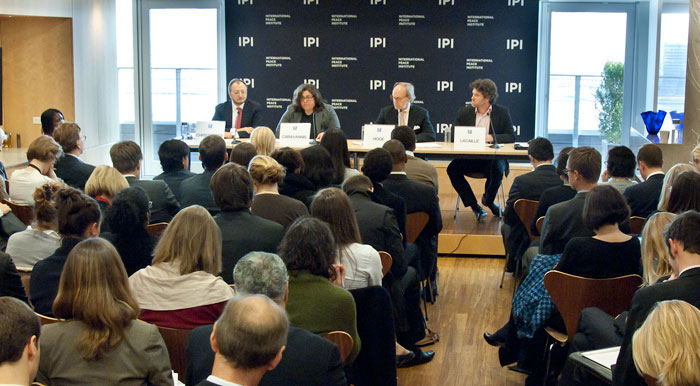 The International Peace Institute on December 12th held a policy forum focusing on the just-completed balloting in the Democratic Republic of the Congo that brought a crowd of 120 people to IPI’s Trygve Lie Center.

The meeting, which featured a three-person panel and was held under the Chatham House rule of non-attribution, dealt with the disputed outcome of the election and whether it would be accepted by the population or instead provoke violence.

Read tweets about the discussion >>

Moderating the meeting was IPI’s Senior Adviser for External Relations, Warren Hoge, who began the off-the-record discussion with these introductory remarks:

As you know, presidential and legislative elections were held in the DRC a week ago—on Monday, November 28th—and provisional results of the presidential contest were published Friday by the country’s election commission.

They showed that President Joseph Kabila had won a second term with 49 percent of the 18.1 million votes cast and that longtime opposition leader Etienne Tshisekedi trailed with 32 percent of the vote. Results of the parliamentary races are scheduled to be announced in mid-January.

This was the second democratic election in Congo’s 51-year history and the first to be organized by the government instead of by the international community. The last was in 2006 and saw Kabila become the elected president. He had taken control of the country after the 2001 assassination of his father, Laurent Kabila.

Since Friday there has been an air of extreme tension in the DRC and among the many people who follow events in the DRC from afar. This was anticipated by election commission chief Daniel Ngoy Mulunda, who read a statement before announcing the results saying, “The candidates must understand that in every election there is a winner and there is one or several losers.”

Mr. Tshisekedi, a popular figure over three decades with a proven capacity to mobilize large numbers of supporters, said he was the rightful winner and the election was rigged. He hinted that his backers, whom he ominously refers to as “fighters”, might take to the streets, and this weekend he said that mass opposition rallies would take place in Kinshasa and other cities tomorrow.

Although international observers have said the vote was flawed, they have stopped short of calling it fraudulent and some have said the irregularities were not widespread enough to affect the outcome.

However, their views have sharpened in recent days, with the Carter Center saying on Saturday that the results quote lack credibility and quote call into question the integrity of this results process writ large. There is also a widely anticipated report from the EU expected tomorrow.

Today in Kinshasa, President Kabila gave a press conference in which he said, “Were there mistakes made? Of course, like in other elections on the continent and elsewhere. But does that put in question the credibility of the elections? I don’t think so.”

Predictions of possible violence are particularly fraught in the DRC. The country has gone through an extended civil war over the past 15 years that cost the lives of 5 million people and involved at least 20 different rebel groups and armies from nine other African nations.

In addition, Africa watchers fear a repeat of the kind of volatile postelection standoff that has followed other recent votes on the continent where the outcome is not accepted by rival candidates. Charges of irregularities in the DRC include missing ballots, polling stations that did not open, ballot box stuffing, voter intimidation, and districts reporting that nearly 100 percent of their voters cast ballots for the same candidate.

The Supreme Court is supposed to resolve electoral disputes, but the opposition suspects its membership is too pro-Kabila and may instead take its grievances to the streets. Both sides have shown that they can mobilize militias and armed youth groups.

Five years ago, the UN played a critical role in organizing and overseeing the vote. But this year, its involvement was more limited in keeping with the Security Council resolution in May of 2010 that we noted in the invitation that confines the UN role to providing “technical and logistical support for the organization” of the elections.

Of course, the UN remains a major factor in the country since the UN Organization Stabilization Mission there, known as MONUSCO, is, with its 19,000 troops, the UN’s largest peacekeeping force.

In recent days, there has been a flurry of suggestions of how the current impasse can be broken, ranging from the appointment of outside mediators, the mounting of legal challenges, new votes in particularly contested districts and even a runoff between Kabila and Tshisekedi, even though the election law was changed this year to eliminate a runoff.

Finally, there is concern that the international community, its patience exhausted by the continual violence and the country’s dubious distinction of being last in the UN’s World Development Index, may have disengaged from the DRC.

We have assembled a distinguished panel to discuss all of this today, and let me note at this point that in order to produce the most candid commentary possible about a situation that is still ongoing and very volatile, we are placing this discussion under the Chatham House rule of non-attribution. I sent out a notice Friday to all the journalists invited advising them of that fact.

Now at the time we sent out the invitation, we had reason to believe that one of the panelists would be a ranking diplomat from the DRC Mission to the UN, but we learned late Friday that she would be unable to participate today and that the mission had no one available to send in her place. I mention this not as a complaint but simply as an explanation to you, the audience, of why one of the people originally on the invitation is not here.

You have the full biographies of the three remaining panelists, and let me just introduce them briefly in the order in which they will speak.

Jack Christofides is the Team Leader for the Great Lakes region in the Department of Peacekeeping Operations and has served in high-level positions for the UN for more than 20 years here, in Geneva and in the field.

Tatiana Carayannis is a teacher, researcher, blogger, author and specialist in humanitarian and security issues in the Great Lakes region who is currently Deputy Director of the Conflict Prevention and Peace Forum.

Guillaume Lacaille is a free-lance political analyst and author, focusing on conflict-affected countries in Africa. He worked for the International Crisis Group and, prior to that, served in UN peacekeeping missions in the DRC and the Cote d’Ivoire.