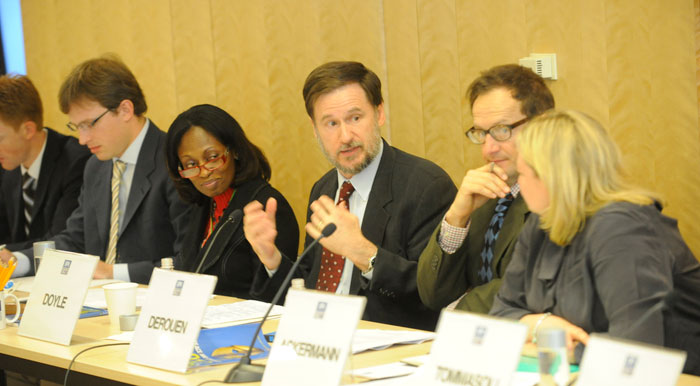 An international forum titled “Conflict Prevention and Preventive Diplomacy: What Works and What Doesn’t?” was held at IPI on December 15, 2011 and was attended by more than 50 participants from UN permanent missions, multilateral agencies, think tanks, and universities.

This was the first meeting of the International Expert Forum (IEF), a joint collaboration between IPI, the Folke Bernadotte Academy, the SecDev Group, and the Social Science Research Council. The meeting, held under the Chatham House rule of non-attribution, examined both research and insights from the field.

The first of the three sessions discussed the critical importance of research in informing and shaping policy responses. Participants said that recent normative shifts have effectively “raised the bar” in terms of promoting a “culture of prevention” and the protection of civilians. What has also changed is the role of new communications technologies–from social media to crowd sourcing–and their potential in both influencing and speeding up conflict-initiating and terminating processes. A number of important trends were discussed that signal how approaches to early diplomacy and conflict prevention are evolving.

First, a growing consensus is emerging that early prevention is as important as late prevention. Second, there is now a common sense view that a “cycle of prevention” is critical, with as much focus on preventive peacebuilding as post-conflict peacebuilding. Finally, there is a growing commitment to so-called “structural prevention” with a focus on creating rule-based and predictable mechanisms to deter and reduce the likelihood of massive violence onset and duration.

Nevertheless, there are still a number of blind spots. Much research is able to say something about “what” is going on, but has less to say about “why.” There are also challenges with the questions being asked by researchers as opposed to the needs being requested by practitioners.

The second session explored the experiences of practitioners in advancing preventive diplomacy and conflict prevention in a wide range of settings. The importance of marrying short-term operational responses with longer-term structural prevention was noted. A recurring theme related to the particular ways in which the mechanisms of the international community could be better leveraged. Another theme related to the proliferation of actors involved in these activities, and the critical role of coordination was repeatedly emphasized.

The assumption that the state was the exclusive, or even the most important, actor was challenged. Many participants alluded to the increasingly pivotal role of private and insider mediators, and, in particular, their ability to step outside of state-centric frameworks and reach out to wider stakeholders in the course of negotiations.

Participants also reviewed the large array of local prevention activities already underway in conflict and chronically violence-affected societies. Most agreed that while still only partially understood, many small-scale, local-level mediation and conflict-prevention activities, could be and are being usefully harnessed. In addition to identifying ways and means of financing these activities, donors were encouraged to improve communication between them and adopt more flexible financing mechanisms.

In the final session, participants noted that notwithstanding important successes in relation to preventive diplomacy and conflict prevention, there is an uneven record. Recent crises in Sri Lanka, the Democratic Republic of Congo, and Syria are a reminder of the difficulties of converting principles into action. When asked “what works”, one participant stressed (1) the importance of recognizing the full cycle of crises in order to anticipate and adequately respond; (2) increasing internal and external awareness through public debate and media attention; (3) getting “close to the crisis” and needs on the ground; and (4) proactively talking to all stakeholders and forging partnerships. In a world of scarce resources, the participant noted, it is also important to avoid what does not work.

Most participants were optimistic about the future of early diplomacy and conflict prevention. It was noted that the wider norms of protection and prevention were being increasingly accepted across the multilateral system. A key point underlined by one participant was the importance of “operationalizing” recent normative guidelines and prescriptions. Moreover, the UN must seek to build on and work with the expanded networks of actors involved in these issues.

All of the participants agreed that some persistent challenges remain. These include: difficulties in predicting “threshold” events; the political challenges with the Security Council regarding intervention; lingering concerns associated with sovereignty; and the difficulties of achieving coherence, coordination and complimentarity given the rise of diverse actors.