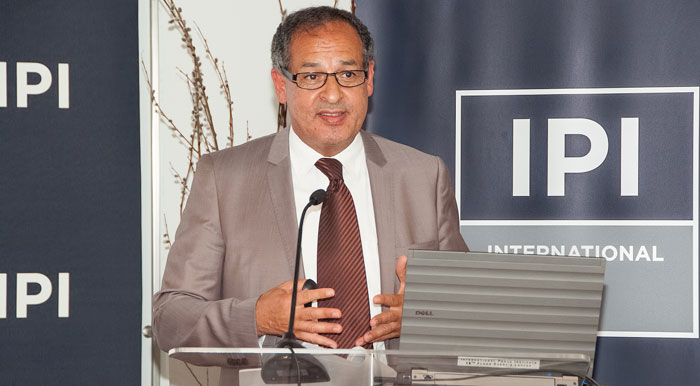 “Our cooperation approach with states is global and systematic; together with states we do not want to wait until a disaster occurs,” Khammar Mrabit, Director of the International Atomic Energy Agency’s (IAEA) Office of Nuclear Security, told an IPI lunchtime forum on June 27, 2012.

“That is why, with states receiving IAEA assistance, we have what we call national Integrated Nuclear Security Support Plans (INSSPs) that consolidate individual nuclear security needs and priorities of states, and also provide customized frameworks for coordinating and implementing nuclear security activities conducted by the recipient states concerned, the IAEA and potential donors. Such plans cover all the areas of prevention, detection and response to have an adequate nuclear security infrastructure.” For nuclear security, he said, “It’s better to prevent rather than mitigate. So prevention is one important principle of nuclear security.”

Mr. Mrabit provided an overview of the IAEA’s nuclear security program, and explained how the IAEA assists states to achieve nuclear security through establishing global guidance and standards and providing for their application.

Nuclear and other radioactive materials have many beneficial peaceful applications. And radioactive material is found in every country on earth, Mr. Mrabit said, but such material needs to be controlled and protected to prevent harmful uses in crime and terrorism. “The risk is there, the risk is real and global,” he said.

Complacency also creates risks, he said. “States that are complacent, who believe there is no problem—that is when the real problem starts.”

Since 1995, there have been 2242 incidents involving nuclear security as collected by the IAEA’s Illicit Trafficking Database based on information provided or confirmed by states, Mr. Mrabit explained, underscoring the importance of the issue. He cited the example of highly enriched uranium seized in Moldova in June 2011, and other examples in Bulgaria in 1999, Slovakia in 2007, and Georgia in 2010.

Despite all the work the IAEA and other actors are doing, challenges remain, including the lack of a fully functioning global framework, and in getting states to implement IAEA guidance and standards. There is greater recognition, however, of the importance of nuclear security today and of the IAEA’s leading role in tackling it, he said. “I’m very happy to see very many people here aware of what’s going on and willing to talk more about this.”

“Countries have been using more and more [IAEA] recommendations even if they are not mandatory,” he said. “All countries realize the importance of such guidance and standards from the International Atomic Energy Agency, and they are asking the IAEA to come and assess the effectiveness of their physical protection systems,” including countries with established and advanced nuclear programs such as the United States, France, China, etc.

“Although our guidance and standards are not mandatory, they are becoming more and more “de facto” the norm,” he concluded.

The event was moderated by IPI Senior Adviser for External Relations, Warren Hoge.