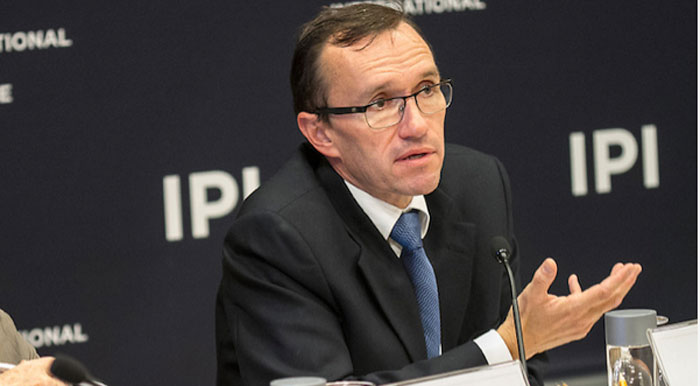 “How do we manage the inclusion of people who are normally not a part of politics?” asked Espen Barth Eide, Norwegian Minister of Foreign Affairs. Mr. Eide posed the question to five panelists on September 27, 2012 at an IPI event entitled “States in Transition: Ensuring Equal Rights and Participation for All.”

The event was IPI’s fifth annual Trygve Lie Symposium on Fundamental Freedoms. The discussions focused on the inclusion of women and minorities in democracy building, as well as on the role of the international community in supporting state transitions.

Maria Otero, US Under-Secretary of Civilian Security, Democracy and Human Rights shared the US’ experiences in continuing to improve its own democracy. She said, “We advocate for a very strong role for civil society in being engaged in a very inclusive way in the democratic process.”

Ms. Otero also discussed the need to convert police forces in states such as Tunisia or Egypt that have worked to suppress populations rather than protect them. Mr. Eide contributed the phrase, “From public control to public service.”

Louise Arbour, President of the International Crisis Group, talked about the role of local populations in the Arab Spring, and complimented the leadership of panelists Esraa Abdel Fattah and Alaa Murabit, two civil society participants from North Africa.

Ms. Arbour said, “These were very indigenous movements, and now that they are taking root, we should respect that aspect of these transitions. I think we should also be very wary and avoid a kind of political tourism in which we can move around the world with our ready-made answers to the challenges that are being faced before these countries that have to manage their own pluralism, their own varied opinions about the role of religion in the setting up of their democracies.”

Abdel Fattah, co-founder of the April 6th Movement in Egypt, shared her experience fighting for fundamental change in Egypt. “We have all these challenges, but I am optimistic about the future for all the Arab Spring, not only for Egypt,” she said. “We have a message from this revolution, we have a message from the Arab Spring, and that is that we need to believe in people.”

Ms. Murabit reaffirmed the point: “Transitions cannot be rooted solely in legislation and in constitution. Transitions must be rooted in the people themselves.”

Ms. Murabit, who is the founder of the Voice of Libyan Women (VLW), pointed out the unique situation facing her country. She said, “We never had a government, we never had institutions, we never had civil society… These things are very new to us. Our transition is very much from the rubble.”

Also in attendance was Vidar Helgesen, the Secretary-General of the International Institute for Democracy and Electoral Assistance (International IDEA). Mr. Helgesen had three main points: “Firstly, inclusion is the change, it is not the end product of change; secondly, time is the friend of inclusion, and time pressure is the enemy of inclusion; and thirdly, the international needs be on the side of time and therefore of inclusion.”

Mr. Helgesen explained, “There’s often a rush to redesign constitutions, and of course if you rush to redesign constitutions, it’s impossible to have a truly inclusive process. That’s what we too often see, not enough time for a broad, inclusive national dialogue on the basics of the new state formation and on nurturing democratic culture. That time pressure often tilts the playing field in favor of old elites, or new elites, to the detriment of civil society, of women, of youth.”

He added, “Democracy is good for stability in the long run. The process of democratizing is inherently destabilizing because it’s about altering power relations in society. The trick is really to come through that process and build a new stability, and you can’t get there unless you take the time needed to really secure inclusion in the political process.”

Opening remarks were made by Terje Rød-Larsen, President of IPI. The event was moderated by Mr. Barth Eide.