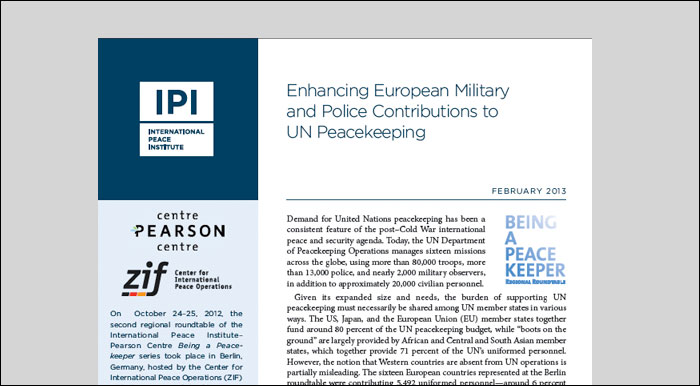 In the context of the impending NATO withdrawal from Afghanistan, a regional roundtable held in Berlin last year discussed the potential for future European commitments to UN peacekeeping. The meeting, which took place October 24-25, 2012, was the second roundtable of the IPI-Pearson Centre Being a Peacekeeper series. It was hosted by the Center for International Peace Operations (ZIF), with the support of the Directorate for Strategic Affairs of the French Ministry of Defense and the Federal Foreign Office of Germany.

This meeting note is a summary of the key themes that emerged during the discussions. It analyzes the current strategic security context, the evolution and reform of UN peacekeeping, the obstacles to increasing European contributions, and future partnership opportunities. The report concludes with 13 recommendations on strategic outreach, confidence building, and institutional reform.