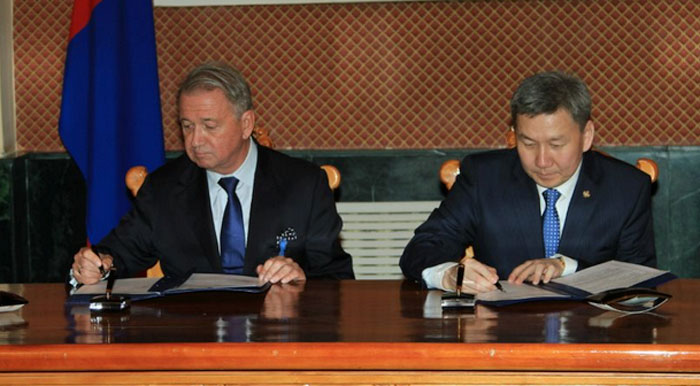 From April 27th to May 1st, IPI President Terje Rød-Larsen visited Mongolia where he met with senior officials and signed a memorandum of understanding (MOU) between IPI and the Ministry for Foreign Affairs of Mongolia.

Mr. Rød-Larsen also chaired a panel discussion as part of the 7th Ministerial Council of the Community of Democracies. This year’s council, held in Ulaanbaatar, concluded Mongolia’s presidency of the Community of Democracies, a global intergovernmental coalition of democratic countries created in 2000 with the goal of promoting democratic rules and strengthening democratic norms and institutions around the world. Several hundred participants took part in the meeting, including more than two dozen foreign ministers, the vice president of Nigeria, the prime minister of Thailand, and Nobel peace prize winners Aung San Suu Kyi of Myanmar and Tawakkol Karman of Yemen.

On April 29th, together with Foreign Minister Bold, Mr. Rød-Larsen signed an MOU between IPI and the Foreign Ministry of Mongolia for a strategic partnership covering the period 2013-2018. It includes providing assistance on strengthening Mongolia’s capacity within multilateral organizations; carrying out research on topics related to Mongolia’s foreign policy interests; and supporting Mongolia’s efforts to promote security and cooperation, particularly in Northeast Asia.

“This long-term commitment paves the way for developing a strong and mutually beneficial partnership between IPI and Mongolia,” said Mr. Rød-Larsen. “There is a wide range of issues that we can cooperate on, and I am confident that we can reach new horizons together.”