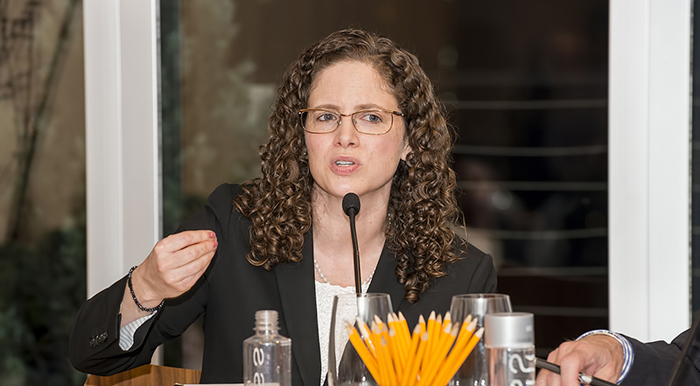 “Why is it that everyone in the world knows who Osama bin Laden was, but so few people know about all of those who are standing up to all the bin Ladens in these different contexts?” asked Karima Bennoune, an Algerian-American scholar and professor of international law, during an event at the International Peace Institute on October 2nd.

Part of IPI’s Beyond the Headlines and Women, Peace and Security series, the event was organized to discuss the publication of Ms. Bennoune’s book Your Fatwa Does Not Apply Here, Untold Stories from the Fight Against Muslim Fundamentalism.

The book is a result of interviews with 286 people of Muslim heritage from 26 countries ranging from Afghanistan to Mali. At the start of the event, Ms. Bennoune stressed two key takeaways from that research. “In each and every country where jihadi terrorists operate, targeting civilians, there are heroic individuals who are defying these militants,” she said. “And the second is that these brave people need international support to succeed. It’s absolutely critical.”

Ms. Bennoune said part of the impetus for writing the book came from her Algerian father, who denounced what he deemed the “terrorists’ radical break” from traditional Islam. She said another reason was her frustration with the circumscribed views of Islam in the US. She said the Western right offers the flawed characterization that Islam is inherently fundamentalist, and the left is too skittish to even broach the topic of Muslim fundamentalism, which is seen as too controversial.

“The best way to battle Muslim discrimination is to tell stories of Muslims who themselves have been victims of jihadists,” said Ms. Bennoune. She told several stories from the book during the event. One was about an arts organization in Lahore, Pakistan that even after attempted bombings on its shows, continued to sponsor thousands of performers from all over the world. A second tale centered on a man in Minneapolis who organized basketball tournaments and other community activities to curb al-Shabaab recruitment in his poor Somali immigrant neighborhood, which is known as Little Mogadishu.

“Instead of just battling terrorism, you must fight fundamentalism,” she said. “It is fundamentalism which makes the bed of terrorism.” She argued that “fundamentalisms are political movements of the extreme right, which in a context of globalization, manipulate religion in order to achieve their political aims.”

Ms. Bennoune contended that this kind of extremism is more dangerous than many believe and chastised Western apologists who claim that there are “moderate” forms of fundamentalism.

Women are particularly imperiled, she said, arguing that “The center of the fundamentalist ideology within Islam, as well as within Christianity and Judaism and so on, is an attack on women’s rights and a giving up of women’s equality.” She posited that many of the people resisting fundamentalisms are women because they are more often the first victims, and that increased violence against women is an early warning sign of fundamentalist armed conflict. “And often the international community doesn’t really respond because that’s not seen as political,” she added. “That’s seen as cultural.”

She told the story of the first and only female chief prosecutor in Afghanistan, who, after many attempts on her life and near-constant harassment, has had to hire 23 security officers. “‘Afghan women are disappointed that the international community seems more interested in the success of the political talks with the Taliban than in supporting women,’” Ms. Bennoune quoted the woman prosecutor. “’They must not forget the promise of women’s rights because now they want peace with the Taliban.'”

Ms. Bennoune said she was compelled to tell these stories so that others would not have to relive them. “What we do not have is a right to be silent because it is easier, because the topic is sensitive or controversial. The time to raise our voices is now.”

The last story Ms. Bennoune shared centered on an Algerian newspaper that was bombed for publishing anti-fundamentalist sentiment. She said she carries a copy of the paper that the editors defiantly published the next day as a reminder to speak up.

She shared the headline with the IPI audience: “Pen against Kalenshnikov: is there a more unequal struggle? What is certain is that the pen will not stop.”