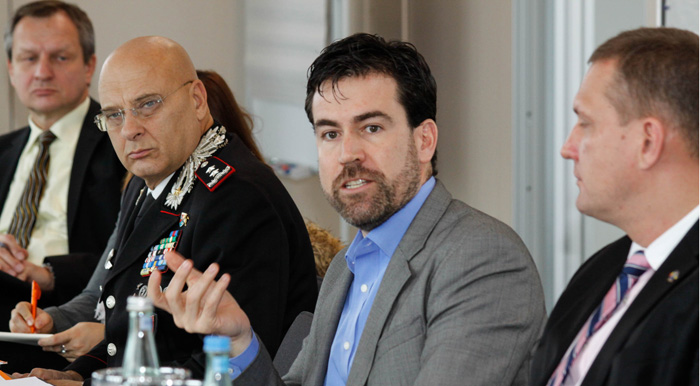 On November 4-5, IPI, together with the Center for International Peace Operations (ZIF), organized an expert seminar in Berlin to improve the capacity of peace operations to respond to the threat posed by organized crime. The two-day meeting brought together senior practitioners and planners from the UN, the EU, OSCE headquarters and field missions, as well as independent experts for a frank, off-the-record discussion in which participants shared their operational experiences in dealing with organized crime, identified existing tools and approaches, and compiled lessons learned and good practices.

As highlighted in IPI’s recent publication “The Elephant in the Room: How Can Peace Operations Deal with Organized Crime?”, organized crime is a threat in almost every theater where the UN has peace operations, but the UN has few mandates, tools and experts to deal with this challenge. This can endanger the mission, and thwart efforts to keep and build peace.

That said, it was noted that the UN’s practices for dealing with organized crime are evolving, for example in Mali. Lessons learned from the EU mission in Kosovo (EULEX) were also discussed.

Discussants highlighted that executive mandates for peace operations to tackle organized crime (e.g., in East Timor and Kosovo) are rare. They also noted that peace operations may not necessarily be the best actors to tackle organized crime. Indeed, crime-fighting may jeopardize other aspects of the mission’s work. However, it was stressed that peace operations need to be aware of the political economy of the environment in which they are operating (particularly the role of spoilers), and can play a role in disrupting criminal activity, as well as transforming fragile and post-conflict environments in ways that promote the rule of law and sustainable development.

Among the points raised in the meeting was the lack of political guidance for experts dealing with organized crime in international field operations. Even in cases where the tools and expertise exist to address organized crime, there is often a hesitancy on the part of senior officials (in the field or at headquarters) to confront individuals or groups involved in illicit activity for fear of “rocking the boat.” However, it was noted, failure to address the problem at an early stage can allow these actors to consolidate their positions, and exert influence on business and politics.

It was stressed that the political economy of illicit activity should be factored into situation assessments, particularly in the planning and pre-deployment phase of field missions. The importance of intelligence gathering was also highlighted.

The challenge of finding sufficient experts with the necessary skills and expertise to deal with organized crime was raised. The need for training and standard operating procedures was stressed. The advantages and disadvantages of deploying small, specialized, pre-formed national crime-fighting units (like gendarmerie) as opposed to bringing together individuals in multinational teams were discussed.

Participants underlined the importance of a comprehensive criminal justice approach. More effective policing alone is insufficient. Prosecutors and judges must also be willing and able to deal with cases of organized crime. The importance of witness protection was also underlined.

The impact of development on strengthening resilience against organized crime was examined. It was stressed that development agencies, municipal authorities, civil society and the private sector all need to be engaged in activities that can create viable alternatives to organized crime, particularly for youth.

The question of security was raised. Should civilian actors engage with armed groups, and if so how? What should one do if the people who are supposed to be part of the solution are actually part of the problem? It was suggested that risk assessment practices should be improved to allow for greater flexibility while ensuring the protection of personnel.

For the way forward, it was concluded that a dual-track approach is needed. On the one hand, a dialogue is needed among high-level officials in order to look at the place of organized crime in current doctrines and procedures concerning peace operations, and to provide guidance on if and how such operations should deal with illicit actors and flows.

On the other hand, more effective use should be made of existing tools and good practices, and new methodologies should be introduced to fill any gaps. ZIF and IPI suggested that the lessons learned from the workshop could be collected and used as the basis for a toolbox for practitioners dealing with organized crime in peace operations.

Through its “Peace without Crime” project, IPI will continue to provide recommendations and support to multi-lateral actors involved in finding more effective solutions to dealing with organized crime.