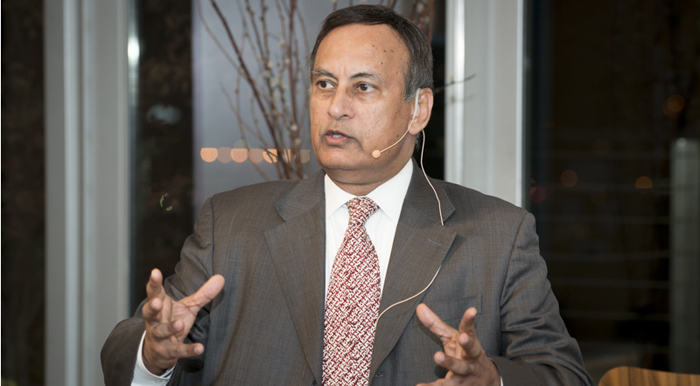 “We Pakistanis need an honest debate inside our country about what is Pakistan’s national interest. We never have it,” said Hussain Haqqani, a former Pakistani diplomat and journalist, who was at IPI on November 19th to give a presentation on his latest book, Magnificent Delusions: Pakistan, the United States, and an Epic History of Misunderstanding.

Mr. Haqqani, who now teaches at Boston University and works at the Hudson Institute, stressed the need for candid dialogue within his country. “If you look at Pakistani television, all you see is Pakistani politics, denigration of Pakistan’s critics, a little bit of religion thrown in for good measure, a lot of sectarianism, and criticism of everybody else in the world from America to India to Israel. Everybody is responsible for our problems.”

Mr. Haqqani said part of the book’s impetus was to uncover how the author’s home became such a global center of Islamism and jihadism. He theorized it was because of longstanding insecurities about the nation’s future, constant fear of India as an existential threat, and many leaders’ attempts to avoid the country splintering along ethnic lines by creating a religion-based nationalism.

There is a deep-seated fear of India, he told the audience, and added that even today children are taught in school that India poses an existential threat. Mr. Haqqani contended that this outdated fear itself is the real threat to Pakistanis, by coopting legitimate national debate about significant and pressing problems.

“Pakistan’s advantage lies in having closer ties with its neighbors, not in having a notion of existential animosity and hatred,” he said. “Will Pakistan present itself and think of itself as a warrior nation or as a trading nation? Pakistan sits at the crossroads of Central Asia, South Asia, and the Middle East.”

One of the biggest problems is education, he said, noting that half of Pakistan’s 200 million people are below 21, with a mere 58 percent of school-aged kids enrolled in school. Mr. Haqqani compared this to regional states India and Bangladesh, which both have over 90 percent enrollment rates.

“People don’t see the fact that half the kids not in school, or the other half in school not learning much as relevant to the modern world,” he said. “They don’t see that as a security threat.”

On US relations, Mr. Haqqani, who was Pakistan’s Ambassador to Washington from 2008 to 2011, argued that decades of aid has come with tragic misunderstandings on both sides. In addition to extensive loans and financial aid, he said, Pakistan’s navy and air force are equipped primarily with outdated ships and jets from the US—the result of recurring direct military aid from America.

Both nations want various things they will never get from the other, he argued, and this delusional relationship has left Pakistan codependent and dangerously ignorant of its real challenges.

“Here’s the bottom line of the book,” he said, “the United States and Pakistan perceived their national interests so widely divergently that they could not and should not have been allies. What’s needed are circumstances for Pakistanis to think, ‘Oh God, we are trouble.’ The problem is that whenever there has been trouble, the United States comes along with a bailout.”

Mr. Haqqani said there are many pressing issues in Pakistan—including media propaganda and government corruption—but that terrorism still poses the biggest threat. “Corruption of our leaders is a problem,” he said, “but militarism and jihadism are bigger problems.”

Indeed, Mr. Haqqani said Pakistan could only move forward once its people realize that a religion-based, hyper nationalism, supported by nuclear weapons and jihadi terrorism, will only put the country in conflict with the rest of the world, and that the US cannot support Pakistan forever.

Mr. Haqqani said he remained a patriot and looked forward to returning home someday. He concluded the presentation with the optimistic notion that circumstances may in fact be ripe for a serious national dialogue.

“With the sectarian violence increasing, domestic terrorism increasing, I think Pakistan is right at that point where Pakistanis can be with some effort convinced that the real threat to Pakistan is terrorism, not India,” he said.