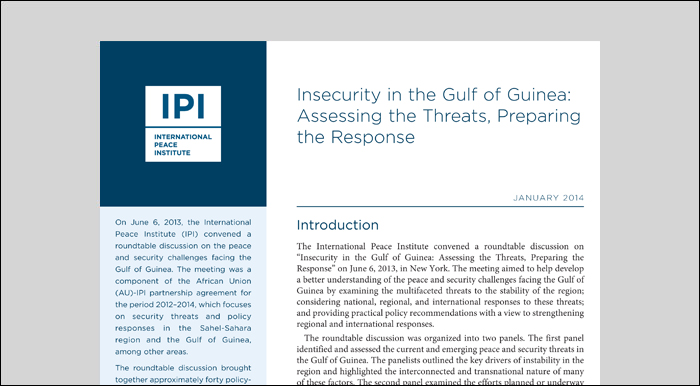 This meeting note addresses current and emerging threats in the Gulf of Guinea, including piracy, and the conditions that contribute to their rise, such as economic inequality and poor governance. The report summarizes key themes from a roundtable discussion held at IPI last June on the security challenges in the region. The meeting was a component of the African Union (AU)-IPI partnership agreement for the period 2012–2014, which focuses on security threats and policy responses in the Sahel-Sahara region and the Gulf of Guinea, among other areas.

The note finds that piracy and maritime insecurity are some of the symptoms of growing regional insecurity, but the triggers can be attributed to economic deprivation and exclusion, poor governance and limited legitimacy, pollution, natural resources management, as well as the impact of the crisis in the Sahel region and the spread of transnational crime.

The rapporteurs then discuss national, regional, and international strategies to confront insecurity, including a summary of the outcomes from the Yaoundé Summit on Maritime Safety and Security, which took place shortly after the IPI roundtable.