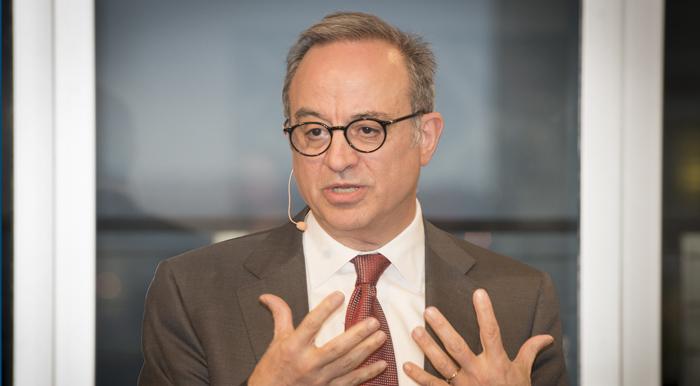 Pluralism—awarding equal rights despite political, religious or cultural preferences—is the only governance model that will allow the Arab world to thrive, argued Marwan Muasher, a Middle East scholar and Vice President for Studies at the Carnegie Endowment, on March 19th. Mr. Muasher, a former foreign minister and deputy prime minister of Jordan, appeared as a guest in the International Peace Institute’s Distinguished Author Series to discuss his new book, The Second Arab Awakening and the Battle for Pluralism.

As the Arab states move away from strong-arm autocratic regimes, there’s no simple or fail-safe formula for success, the author said, but those who don’t wholly embrace pluralism are sure to fail. “Pluralism is not a guarantor for stability and prosperity, but it’s a necessary prerequisite,” he said. “In other words, selective democracy is no democracy at all.”

Mr. Muasher warned against using the term “Arab spring” because, he said, it suggests the idea that these countries would transition quickly and without problems. That states in the Middle East and North Africa, newly rid of dictators in countries that have never known democracy, would easily transition in a few short years is a “very romantic notion,” he said.

The flipside of that saccharine perception, the former minister added, is the pessimism evoked in more recent references, such as “Arab winter” or “Arab inferno.” People focus on Syria, Egypt, and Libya and predict “darkness for the foreseeable future,” he said. “The fact is more nuanced than that.”

Writing on the Wall

To illustrate some complexities of Arab transitions and the importance of pluralism, Mr. Muasher offered three different models of transitions.

In three years, Tunisia went from a police state to a successful democracy, he said. Although there were difficulties along the way—including assassinations and protests—in the end, Tunisia drafted and ratified a new constitution through an “inclusionist process,” he explained.

This constitution is “by far the best constitution the Arab world has ever, ever known,” he said, adding that it “upholds total parity between men and women,” reinforces the notion of a peaceful rotation of power, and defends “the right to believe or not to believe.”

Mr. Muasher said the transition in Egypt could be referred to as the “convoluted model or the zero sum game model,” in which election winners think they can dictate their views on the rest of society or ignore them completely. By pushing a constitution without consulting other forces, he explained, the Islamist government “behaved as if a snapshot in history dictates how people are to live forever.”

And, he added, “in a zero sum game, I keep saying, sum will always be zero.”

Lastly, in Syria the leadership has stopped at nothing to stay in power, including killing more than a hundred thousand citizens, the author noted. As a result, he added, “you have horrific war with no possibility of a solution any time soon.”

If people adopt a pluralistic discourse, it is clear what it leads to, Mr. Muasher said, and, conversely, the opposite is equally evident. “The writing is already on the wall,” he said.

The author identified four areas to apply the idea of pluralism to: politics, culture, religion, and gender. Although the Arab world has known equality in some of these areas, he contended, no country has achieved pluralism in all four.

“One can no longer, in my view, talk about prosperity and stability in society while certain groups—whether they are Christian or Kurds or women—are treated in any way that is less than that of the rest of society,” he said.

Mr. Muasher said that some consider him naive for spouting such views while so much turmoil continues across the Middle East and North Africa. He contended, however, that pluralism is the only way these states will successfully replace the strong-arm dictators that have ruled the Arab world for decades.

Rather than simply “romantically wish” that the Arab world adopts these principles, he said, it’s imperative to work towards democratic societies from the bottom up—a transition process that will likely take many years.

“People need to roll up their sleeves and work on the ground,” he concluded, “to create the institutions that are necessary for the evolving of pluralistic and democratic societies.”

The event was moderated by Warren Hoge, IPI Senior Advisor for External Relations.