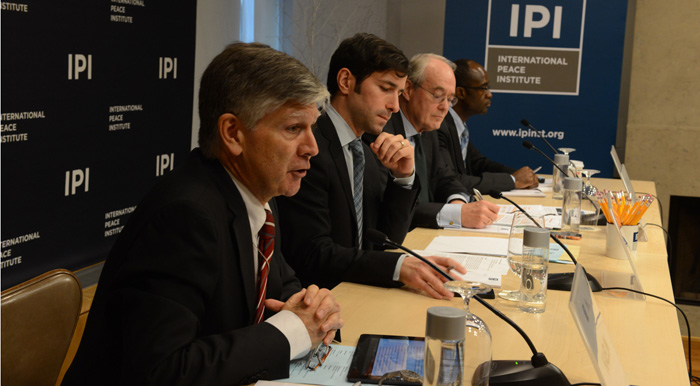 What are the links between climate change, conflict, and the displacement of people? A panel of experts discussed this nexus and its implications in the Horn of Africa at the International Peace Institute on April 3rd in an event cosponsored by the Nansen Initiative.

It’s clear that these phenomena are interrelated in the modern world, argued Udo Janz, Director of the New York Office of the UN High Commissioner for Refugees. Who is to say, for example, whether people crossing the Mediterranean to Europe are “driven by climate change, persecution, drought, or conflict?” he asked. “It is probably a compound of all those reasons.”

To illustrate the urgency of that particular flow of people, he noted that some 24,000 people have drowned attempting to cross the Mediterranean in recent years. These recorded incidents, he added, are probably just “the tip of the iceberg and not a reflection of the true figures.”

The Logic of Identity

The overlapping of these phenomena is especially complex in the Horn of Africa, where 70 percent of the landmass is considered arid or semi-arid and is sparsely populated, noted Samuel Doe, Senior Policy Adviser at the UN Development Programme’s Policy Planning Division Bureau for Crisis Prevention and Recovery.

There—and a growing trend elsewhere—“climate change, resulting in more frequent and severe disasters, as well as overall environmental degradation, can in turn lead to conflict as it exacerbates competition for resources and social tension,” said Jérémie Labbé, IPI Research Fellow for Humanitarian Affairs, who chaired the event.

In the Horn of Africa, “the predominant culture is a relationship between those who are pastoralists and those who are agri-pastoralists,” said Mr. Doe. For centuries, these populations have migrated for opportunity or as a “coping mechanism” when droughts occurred, he noted. For them, “the logic of movement and the logic of identity is also significantly different from the current modern citizen notion that we have to wrestle with,” he said.

Migrations across borders—or even between regions within a country—have spurred more conflict in part because of the proliferation of small arms, said Walter Kaelin, Envoy of the Chairmanship of the Nansen Initiative. The Nansen Initiative, a multilateral organization comprised of government and NGOs, aims to develop cross-border partnerships and solutions before crises occur.

Mr. Kaelin added that the “legitimate interests of governments to control their borders” against threat of terrorism have severely limited pastoralists’ migrations, which, in turn, further cripples their resilience with regards to environmental hardships and war.

The cyclical relationship of disaster, conflict and displacement will multiply as the effects of climate change are felt in more places around the globe, said Mr. Janz. “And yet we do not have an international instrument to accord refugee status for people” who are “being pushed out by climate-related changes,” he added.

These complex and evolving challenges are going to require equally intricate innovations, argued Mr. Janz. He said one major obstacle is the industry of human trafficking. “We must curtail the smuggling business,” he said, and explained that this industry is “much more profitable” than “even gun or heroin smuggling.”

Simply learning how to anticipate migrations and develop policy accordingly remains a challenge, the UN refugee expert contended. “The idea of planning for population movements even a few years ago was sacrilege,” he said.

Mr. Janz praised the idea of “preventive movements and collaborative solutions rather than simply reacting to the crises.” He added that although frameworks for innovative solutions are now being developed, to be effective, these measures will require resources to implement and build transnational institutions.

“Frankly, it’s a far more productive investment” than the traditional approach, which is “to build fences ever higher,” he argued. Countries of asylum “put huge amounts of cash into basically deterrent measures to try to prevent people from coming,” he said in closing. “You will not succeed with that approach. It is quite clear.”