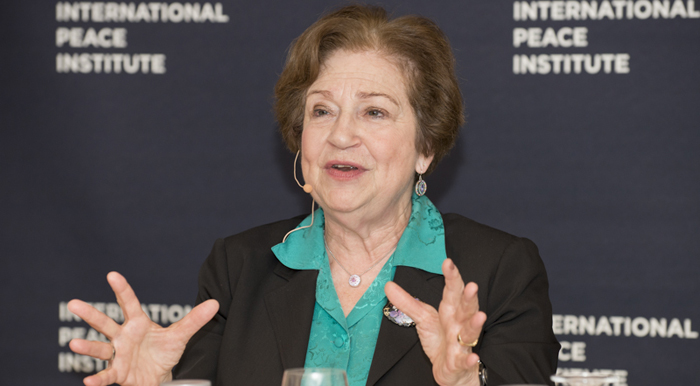 “After four resets and what’s happened in Ukraine, probably the United States should forget resets [with Russia] and focus on realism,” said Angela E. Stent, author of The Limits of Partnership: US-Russia Relations in the Twenty-First Century. She discussed her book at the International Peace Institute on April 17th.
﻿
Ms. Stent explained that since the fall of the Soviet Union in 1991, there have been four resets in which the US and Russia tried to repair bilateral relations. George H.W. Bush instigated the first one by working with Russia to assure the two countries were the sole nuclear superpowers. This reset, which included the nuclear disarmament of Ukraine, was successful on the whole, if limited in scope, she added.

President Bill Clinton, on the other hand, was far more ambitious, Ms. Stent said. His administration focused on supporting the so-called Shock Therapy program, which offered democracy assistance to post-Soviet Russia, and getting Russia to support NATO action in Bosnia and Kosovo, she explained. This reset ended unsuccessfully with Clinton and Boris Yeltsin at odds and with the NATO bombing of Serbia, a close ally of Russia.

Vladimir Putin initiated the third reset, Ms. Stent said, by offering to help the US identify and deal with terrorist targets in Afghanistan. Part of the problem was that Russia wanted an “equal partnership of unequals,” she said, adding that Putin expected the US to recognize that Russia had a greater “sphere of influence” in the post-Soviet space. This gap in how differently the two countries view Russia’s role in geopolitical security structures is being played out today in Ukraine, she added.

The so-called color revolutions—in which factions in former Soviet states tried to overthrow their respective governments—scared the Kremlin, and the ensuing Russia-Georgia war effectively ended the third US-Russia reset, the author said.

In the latest attempt to revive relations, initiated by President Barack Obama, the two countries collaborated on arms control, particularly in the Eurasia region, Ms. Stent said. As with previous resets, she added, this partnership was overly dependent on the relationship between the heads of state: Obama and Putin. The relationship started to crumble when, after Putin moved from prime minister to president, the Russian leader accused then-US Secretary of State Hillary Clinton of arranging protests against him. The end of the fourth reset culminated with Putin offering amnesty to former National Security Agency contractor Edward Snowden.

There are multiple reasons for US-Russia “booms and busts,” she said, adding that the two nations have “fundamentally different views” on what a working partnership would look like. One problem is that Russia has no real stake in the global security structure, in particular NATO, as the West understands it, she contended. “Certainly I fault the US and Europe for failing to create a Euro-Atlantic security architecture in the 1990s in which Russia had a stake,” she said.

A second obstacle is that there is no economic complementarity, she said. For instance, she explained that the US has only $40 billion worth of bilateral trade with Russia—a pittance when compared with America’s trade with economic superpower China, which is roughly $500 billion a year.

That said, the US will continue to work with Russia on multilateral issues such as Syria, Iran, and the Arctic, which she called a “very important region.” However, “expectations of what the bilateral relations could bring have to be very, very modest,” she concluded.

The event was moderated by Warren Hoge, Senior Adviser for External Relations at IPI.