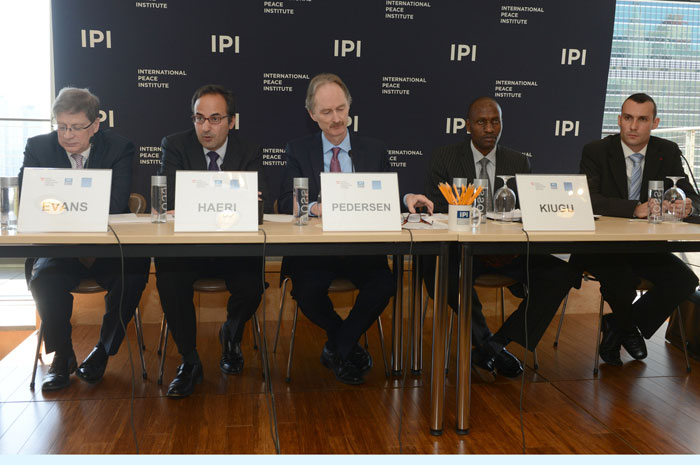 The protection of civilians is now a crucial aspect of UN peacekeeping missions, as well as of NATO and African Union (AU) operations. This is what emerged from a half-day seminar held at IPI on May 20th entitled “Protecting Civilians in Peace Operations: Best Practices and Emerging Issues.”

Organized jointly by IPI and the governments of Austria and Norway, the seminar brought together practitioners from both the humanitarian and peacekeeping fields and individuals with personal, on-the-ground experience protecting civilians.

“Protection of civilians is at the heart of peacekeeping mandates,” Ambassador Geir Pedersen of Norway said at the seminar’s opening. And according to the majority of the speakers, protecting civilians is now the most important factor that both NATO and AU peacekeepers take into account when deploying to crisis areas.

The seminar also pointed to how conflicts worldwide still pose serious threats to the lives of thousands of civilians. “Today’s conflicts have a devastating impact on civilians with dire humanitarian and human rights consequences,” said Andreas Riecken, Chargé d’Affaires of the Austrian Permanent Mission to the UN.

The seminar highlighted some of the challenges that still remain when it comes to the cooperation between humanitarian and military personnel in peacekeeping missions.

“There is a complex operational interplay between humanitarian actors and military actors in these environments [as] we come from distinct entry points, and have sets of principles that in some cases are distinct” said Greg Puley, Chief of the Policy Advice and Planning Section at the UN Office for the Coordination of Humanitarian Affairs (OCHA). “But we must work together.”

Now, mission mandates that include language on the basic protection of civilians also call for the “creat[ion of] the security conditions conducive to the provision of humanitarian assistance,” he said. This, he added, means that cooperation between the sectors two is essential.

The important, though complex relationship between the humanitarian and peacekeeping communities is something that both NATO and the AU have also been exploring.

“There are two dimensions to NATO peacekeeping missions,” said Stephen Evans, Assistant Secretary-General for Operations at NATO. “The first is when the protection of civilians is the mandated focus of a NATO operation,” such as the alliance’s missions in the Former Yugoslavia during the 1990s. In such cases, Mr. Evans said, NATO troops are deployed specifically to protect civilians who are under threat.

The other dimension, he said, is when the protection of civilians is an act of “mitigation” during a larger military operation. Mr. Evans said that, in such cases, troops should work to limit accidental civilian deaths. The current mission in Afghanistan is of this second kind, he said, as NATO troops are expected to fight insurgents while also protecting civilians.

In such hybrid missions, protecting civilians can also turn into an operational asset, the speakers noted. “Avoiding civilian casualties enhances the support of the local population,” said Robert Ayasse of the Focal Point for Protection of Civilians at NATO headquarters.

But while the protection of civilians has become an essential component of NATO’s work, as Mr. Evans and Mr. Ayasse noted, African Union missions still face some hurdles in that regard.

Walter Lotze, of the Peace Support Division of the AU’s Mission to Somalia, said that only recently did the AU get around to including in its missions language explicitly mentioning the protection of civilians. It was in 2012, he said, that the AU’s Peace and Security Council took what he called a “landmark” decision by enshrining the protection of civilians in all future AU mandates.

“That means that all our missions will now have considerations on the protection of civilians as part of the planning process, as part of the mandate, and as part of what we do in the field,” he said.

But reforming the AU’s mission mandates may not be enough, some speakers noted. “One of the biggest problems we have is our lack of resources,” said Col. Aphaxard Kiugu, Military Adviser to the Permanent Mission of Kenya to the United Nations. Some AU states, including Kenya, Rwanda, and Ethiopia, have offered to provide troops to support efforts in South Sudan, but they still need logistical support from the UN, he said.

The two panels were chaired by Ambassador Pedersen and by Adam Smith, IPI Senior Fellow and Head of the IPI Center for Peace Operations.

Remarks were also delivered by Brigadier-General Reinhard Trischak of Austria’s Federal Ministry of Defense and Sport; Edmond Mulet, Assistant Secretary-General in the UN Department of Peacekeeping Operations (DPKO), Ben Majekodunmi of the UN Office of the High Commissioner for Human Rights (OHCHR), and Marla Keenan, the Managing Director and Director of Military Engagement at the Center for Civilians in Conflict.

The two panels also included: David Haeri, the Chief of the Policy, Evaluation, and Training Division at UN DPKO; Capt. Brice Erbland, of the French Ministry of Defense; and Hana Salama, of the Every Casualty Programme at the Oxford Research Group.