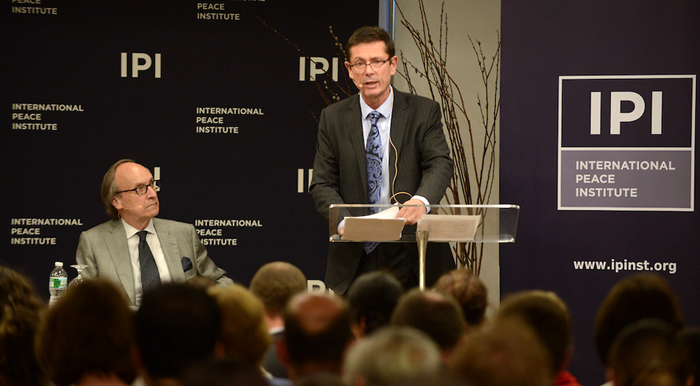 The human rights situation in Ukraine is deteriorating, with the number of unlawful detentions, casualties, and enforced disappearances increasing across the country, according to the latest UN report released by the UN Office of the High Commissioner for Human Rights (OHCHR) in Geneva and at IPI on June 18th.

Ivan Šimonović, UN Assistant Secretary-General on Human Rights, presented to an IPI audience the most recent findings of the report, which is the third of a series of publications released monthly by the UN Human Rights Monitoring Mission in Ukraine (UNHRMMU), a special monitoring mission established in March 2014.

Mr. Šimonović, who has made three trips to Ukraine since March, expressed concern as well as optimism, by pointing to the grave human rights situation in the country, particularly in the eastern regions, but also to the prospects for peace and reconciliation represented by the recent election of Petro Poroshenko as president.

“The situation in eastern Ukraine represents the most pressing challenge to the country at this moment, [where] a climate of lawlessness prevails, with an increase in criminality, killings, abductions, and detentions by armed groups,” Mr. Šimonović said.

At the same time, he called Mr. Poroshenko’s election “an opportunity for a fresh start without corruption and without impunity,” recognizing, however, that the road to reconciliation is anything but smooth.

“President Poroshenko’s challenge now is not one of legitimacy, but more of winning the confidence of the population in the east of the country,” Mr. Šimonović said.

The country has been in a state of unrest since November 2013, when large crowds of Ukrainians took to the streets in the capital Kiev to protest against then-president Viktor Yanukovych’s refusal to sign a major trade deal with the European Union. The protests intensified for months until Mr. Yanukovych was forced to flee the country in February 2014 and find refuge in Russia.

The country was further destabilized by a separatist referendum in Crimea in which voters chose to join the Russian federation. The vote, catalyzed by strong pro-Russian sentiments and allegedly fueled by destabilizing acts committed by the Russian government, led to the de facto separation of Crimea from the rest of Ukraine. As of today, strong pro-Russian sentiments are spreading in the eastern Ukrainian regions of Donetsk and Luhansk, which Mr. Šimonović said is where most of the human rights violations are taking place.

“It is crucial that we seek opportunities to build confidence among the population in eastern Ukraine,” because the armed groups who were able to take power there are “incapable of governing the area,” he said. “Sooner or later, social services will collapse, with extremely negative consequences for the population.”

The UN official also discussed the rising number of internally displaced people (IDPs) across the country, an issue the report addresses extensively. The document confirms that, as of June 6, the number of IDPs stood at 12,700. But it also notes that the number of people who have fled the violence in Donetsk and Luhansk “is believed to be higher and increasing daily,” a point seconded by Mr. Šimonović himself.

In that regard, Mr. Šimonović mentioned, with cautious optimism, recent reports of the government’s decision to establish safe corridors for civilians fleeing areas marred by violence.

“The government’s announcement that it will create transit corridors to allow civilian population to escape fighting must be regarded with caution,” he said, “because the UN has not been requested to play a role in it.”

“If civilians feel the need to leave conflict areas, this should be facilitated, and the government’s announcement is a positive one,” he said. “However, measures should also be taken to provide an alternative to displacement whenever possible, including a system in place for those who decide to stay,” he added.

The Rights Monitoring Mission was initially designed to operate until June 2014, but the Ukrainian government has asked the organization to extend its stay until next September. The UN body, as well as its reports, have come under criticisms of one-sidedness from Russia, a point brought up by members of the audience, but rejected by Mr. Šimonović.

“We are impartial, which means that we always treat all victims and all perpetrators the same, no matter their ethnicity or their political affiliation.”

The 52-page report is available here.