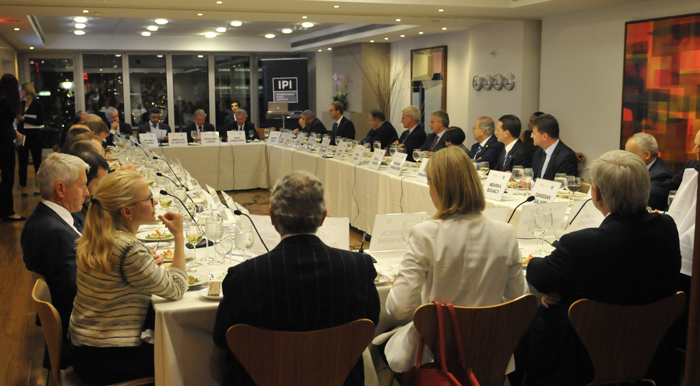 On Monday, September 22nd, IPI held its Ninth Ministerial Dinner on the Middle East in its Trygve Lie Center for Peace, Security, and Development. The working dinner saw the participation of foreign ministers and other high-level representatives from the Middle East and North Africa, Europe, and beyond. The dinner was hosted jointly by IPI President Terje Rød-Larsen; Sheikh Abdullah Bin Zayed al-Nahyan, Foreign Minister of the United Arab Emirates; and Jean Asselborn, Deputy Prime Minister and Foreign Minister of the Grand Duchy of Luxembourg.

Discussion at the dinner covered the so-called Islamic State and the spread of extremism across the region and the Israeli-Palestinian relations with the backdrop of the recent situation in Gaza. Using a series of maps, IPI shared research on the history of the Middle East and how it impacts the present and potentially the future.

The gathering included key figures in the Middle East peace process, such as Tony Blair, the Quartet Representative for the Middle East Peace Process, and Yasser Abed Rabbo, Secretary-General of the Executive Committee of the Palestinian Liberation Organization.

Other attendees included the Foreign Ministers of Canada, Cyprus, Denmark, Egypt, Finland, Greece, Italy, Jordan, Kuwait, Lebanon, Liechtenstein, Luxembourg, Norway, Slovakia, Sweden, Turkey, and the United Arab Emirates. Also in attendance were the Deputy Secretary of State of the US, the Parliamentary Under-Secretary of State for the Foreign and Commonwealth Office, the Secretary-General of the Council of Europe, the Secretary-General of the Organization of Islamic Cooperation and high level representatives from the United Nations.

The working dinner was held under the Chatham House rule of non-attribution.