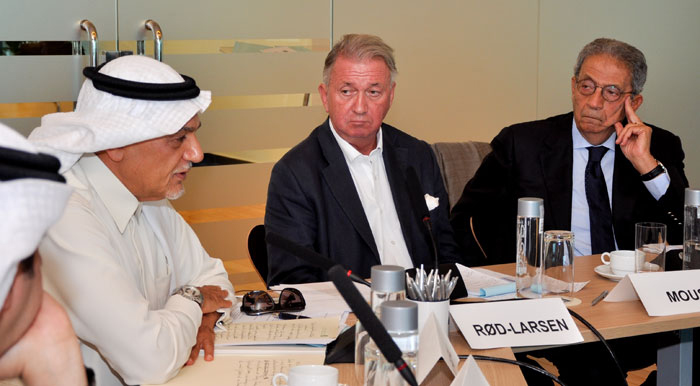 On September 10-11, 2014, the International Peace Institute launched its inaugural meeting at its Middle East Regional Office in Manama, Bahrain titled “Lessons from the Past, Visions for the Future: The Middle East After 1914.”

The meeting, part of a series of events convened by IPI in cooperation with the Salzburg Global Seminar, was sponsored by the government of Norway. It commemorated the 100th anniversary of the First World War and brought together senior government officials, diplomats, and academics from around the world to discuss the legacies of the four-year conflict and its impact on the Middle East.

In particular, the meeting looked at the effects of the 1916 Sykes-Picot Agreement and the San Remo Conference of 1920 on the Middle East of today. The two agreements, which shaped the borders of the region in a profound way, brought a new order in the Middle East along with a host of new challenges that continue to affect the region a century later.

The meeting commenced with an opening dinner on September 10, during which Prince Turki al-Faisal, the chairman of the King Faisal Center for Research and Islamic Studies, gave a keynote address highlighting the region’s history and how the past looms on the present. Participants included former Jordanian Foreign Minister Abdelelah al-Khatib, former Arab League Secretary-General Amr Moussa, and the former Prime Minister of Libya Mahmoud Jibril.

The discussions were held under the Chatham House Rule of non-attribution and focused on: competing narratives of the early twentieth century Middle East which continue to serve as a burden in today’s political arena; the history of state-society relations and governance in the Arab world; and the history of cooperation and integration—and the lack thereof—across the region.

The Middle East of the early 20th century was a different place from the one we know today. Participants highlighted the importance of understanding the long-lasting effects of the re-drawing of the region’s maps at the time. In particular, the discussants noted that emphasizing such lessons and drawing on positive case studies from the past may help us address some of the most pressing security challenges facing the Middle East of 2014.

The discussions also assessed the institutional features of the late Ottoman Empire and how those may provide a unique vantage point from which to understand the region’s make-up today, particularly with regards to state-society relations and sectarianism. Among the questions addressed were: can the uprisings of 2011 be traced back to then? Is the problem simply governance or are the uprisings challenging statehood at large? Is there a relationship between ethnic pluralism and civil unrest in the Arab world?

Finally, participants evaluated prospects for regional cooperation and integration in the wider Middle East. Despite its common culture and language, the region is one of the least integrated in the world, particularly in light of its history of conflicts, sectarian politics, and external influence. Participants assessed the historical roots of this lack of integration in an effort to draw lessons that could facilitate regional cooperation in the future.