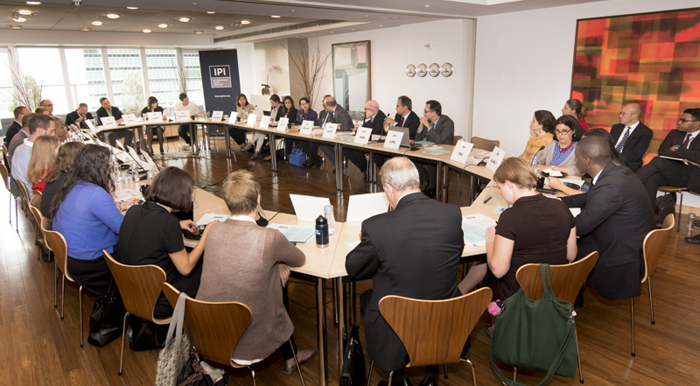 In the twenty years since the Rwandan genocide, the United Nations system has developed a considerable body of policies, principles, and practices dedicated to the goal of preventing future atrocities.

Yet, in 2014, large-scale killings have taken place at an alarming rate, as the tragedies in the Central African Republic, South Sudan, Syria, and Iraq demonstrate. Unfortunately, despite the gains made over the past two decades, atrocity prevention has all too often failed. Why?

On September 9th, a group of diplomats, experts, academics, and representatives from the UN and civil society, gathered at IPI to better understand the nature of this question. The expert roundtable, titled “Preventing Mass Atrocities: Why We Fail and What Can be Done About It” was organized jointly by IPI and the Asia Pacific Centre for R2P. The discussion was held under the Chatham House Rule of non-attribution and revolved around three main points: (1) why mass-atrocity prevention has failed in general; (2) why it has failed where the UN has not had a field presence; and (3) why it has failed even in cases when the UN did have a field mission.

The participants highlighted some of the political and institutional obstacles to atrocity prevention. Often, conflicting national interests can act as a serious obstacle to defusing crises after they have erupted. The more great power interests are at odds, the less likely quick international action becomes, as has been the case in Syria.

The participants also addressed some of the UN’s own institutional obstacles, including issues of decision-making and intelligence gathering. The UN has lacked a unified system for gathering information about risks under common criteria, leading to a shortage of quality intelligence for early warning when atrocities are imminent and decisive action is necessary.

It was noted that when the UN does have a peacekeeping presence on the ground, there is often a gap between the mission’s mandate to protect civilians and the resources allocated to fulfill that responsibility.

The participants discussed the tragic example of the UN Mission in South Sudan (UNMISS), where the presence of UN personnel could not stop the warring factions from engaging in the killing of hundreds of innocent civilians, but was able to save thousands of lives by opening the gates of its base.

The September 9th event was the first of two roundtables which aim to facilitate the exchange of ideas, experiences, and lessons learned from the field. The second roundtable will take place in the first half of 2015 and will seek to formulate possible solutions to the issues raised during the first meeting.