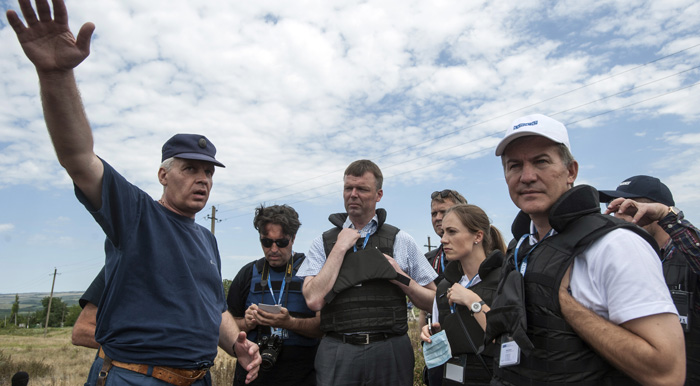 In response to the crisis in Ukraine, the Organization for Security and Cooperation in Europe (OSCE) deployed a Special Monitoring Mission (SMM) of some 250 civilian international observers.

The Mission, launched in March 2014, is mandated to: gather information and report on the security situation; establish facts in response to incidents; and establish contacts and facilitate dialogue on the ground to promote normalization of the situation. The work of the SMM complements an OSCE-led process of political dialogue designed to de-escalate the crisis.

At a meeting at IPI’s Vienna Office on October 27th, participants discussed the challenges and opportunities for the OSCE in a changing security environment, and looked at the Organization’s work in Ukraine in the context of peace operations in other parts of the world.

In 1992, at a (then) CSCE summit meeting in Helsinki, peacekeeping was mentioned, for the first time, as “an important operational element of the overall capability of the CSCE for conflict prevention and crisis management intended to complement the political process of dispute resolution.” The OSCE has yet to deploy a peacekeeping operation per se. However, in the past twenty years there have been a number of OSCE field activities, including sizeable operations like the Kosovo Verification Mission in 1999 which included up to 1400 non-military personnel. Furthermore, since 1994, the OSCE has had a High Level Planning Group that is developing scenarios for a possible multinational OSCE peacekeeping force in Nagorno-Karabakh. As one participant remarked, “peacekeeping covers a wide area of operations, so I think it is safe to say that, de facto, the OSCE already does peacekeeping.”

Winrich Kühne, founding director of the German Center for International Operations, and Adam Smith, head of IPI’s Center for Peace Operations, gave a history of United Nations peacekeeping, and explained its evolution. It was cautioned that “the name of a peace operation creates expectations,” and it is important to get it right “since most people read the name, not the mandate.” Among the issues discussed were: the use of force; the challenges of “stabilization;” balancing mandates and capabilities; command and control; intelligence; as well as the need for sufficient equipment, training, leadership and political will. Keeping the peace where there is no peace to keep was also raised as a challenge, not least in the context of Ukraine.

Since the OSCE is a regional arrangement of the UN under Chapter VIII of the UN Charter, participants discussed what role regional organizations can and do play in carrying out peace operations.

The view was expressed that “the OSCE does not have planning capacity to organize major peace operations,” although its quick and flexible deployment of a civilian mission to Ukraine was praised by a number of participants.

Claus Neukirch, deputy director of the OSCE Conflict Prevention Centre, highlighted some of the challenges of deploying the SMM, including attracting sufficient qualified personnel, raising funds, procurement, hostile environment awareness training (HEAT), as well as security. Discussants noted that the SMM has no force protection or self-defense capacity, and that it is “walking on the edge” in terms of the safety of staff. That said, it was noted that the Mission’s “softness” (as a civilian operation) is its protection.

The SMM is currently seeking additional capacity, such as medical evacuation and unarmed aerial vehicles (UAV). The SMM took delivery of its first UAV last week. It is also “hardening” its capability, for example by acquiring more armed vehicles.

It was noted that some services can be provided by private contractors, while support from military units is also an option. The pros and cons of adding military units to a civilian mission were debated. For some, civilian-military cooperation in hostile environments was seen as the norm, whereas others warned that adding military units could be a “red line” that could significantly change the character of the mission, and how it is regarded.

IPI will continue to work with the Swiss Chairmanship of the OSCE to help the Organization cope with the challenges that it faces today, and in the future. In New York, IPI will continue its long-standing work on peace operations, for example by providing external support for the UN Secretary General’s Review of Peace Operations.