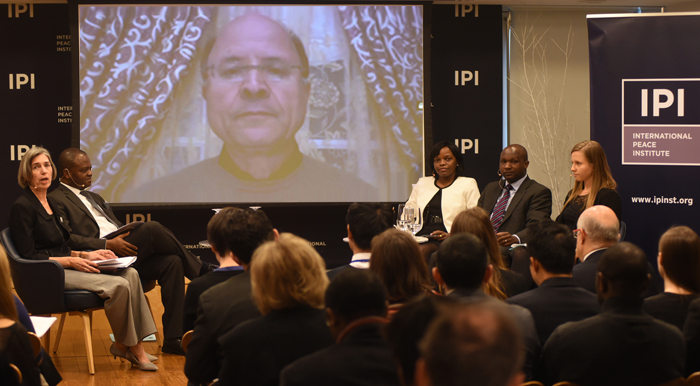 Good governance is the key to Africa’s rise, but structural challenges are pulling the continent back, according to a new report launched at a December 12th IPI policy forum entitled “Effective Governance in Challenging Environments.”

According to the report—a joint undertaking of the International Peace Institute (IPI) and the African Union (AU)—Africa can live up to the “rising” narrative only if it can strengthen its systems of governance, promote inclusive development, and adopt a culture of democracy and peace. The key is to understand what effective governance really means and how to address these challenges.

“Effective governance is about mechanisms and processes that equitably deliver essential public goods and services that citizens have come to expect,” said IPI Senior Adviser Youssef Mahmoud during the launching event. “[These are] the hallmarks of effective governance,” he emphasized.

However, Mr. Mahmoud, who spoke over videoconference from Tunisia, said that global threats such as terrorism and health crises like the Ebola outbreaks are putting increasing pressure on African states, whose institutions are already weak to begin with. In addition, restive populations demanding better services have profoundly affected the way states govern on the continent today.

“The nation-state is becoming much weaker and more vulnerable,” he said.

The report, authored by former IPI research fellow Mireille Affa’a Mindzie, and George Mukundi and Lucy Dunderdale of the African Union, argues that strengthening African institutions at the local, but also national and regional levels, would be important starting points.

“Africans are rising up and are raising fundamental questions about why they have the African Union and their states,” said Mr. Mukundi, who is the head of the African Governance Architecture at the AU Commission. “Are those states legitimate, are they credible, do they have the capacity to deliver for African citizens?”

Mr. Mukundi said that although examples of good governance do exist, they are the exception. Africa has tried to grapple with some of its most serious problems by pooling resources together, or by focusing on common goals for the post-2015 development agenda, he said. But real progress, he added, can’t be achieved “unless we address the inequitable distribution of resources, youth unemployment… and citizen participation at the national level,” a point also made by Ms. Dunderdale.

The panelists noted how ongoing conflicts in the Central African Republic and South Sudan exemplify Africa’s problems today. There, weak governments have relied on people’s local grievances to fuel hatred and violence.

“In South Sudan, ethnicity has been clearly mobilized for political purposes,” said Ms. Affa’a Mindzie, now a policy specialist in the Peace and Security Section at UN Women. And in CAR, she said, years of bad governance have weakened the state in the eyes of its citizens because of its links to violence and insecurity. “These,” she said, “are all illustrative of these manipulations of ethnicity for political purposes.”

The report also looks at how African states are failing to engage directly with their citizens, particularly when it comes to elections. Ozonnia Ojielo, the cluster director in the Governance and Peacebuilding in Africa Department at the UN Development Programme (UNDP) Regional Service Centre, said that when it comes to elections in Africa, the international community needs to rethink its approach.

“Through our support for elections, we are actually supporting the democratic legitimacy of literally one-party structures and how they are using their constitutional framework to extend their stay in power,” he warned. This is because international attention focuses too much on the rules of elections, rather than their politics, he said.

“Elections take place in a context, and that context is defined by the local history and the political culture,” he stressed. The international community hasn’t really tried to understand that, he said, and this is a drawback. “I think that when we focus on the rules, we’re losing out.”

Ultimately, if the promotion of good governance is to gather momentum, it has to put citizens and local-level initiatives in the front seat, the panelists said.

“As long as we believe that the state is the starting point for building peace, we are missing the point,” Mr. Youssef said.