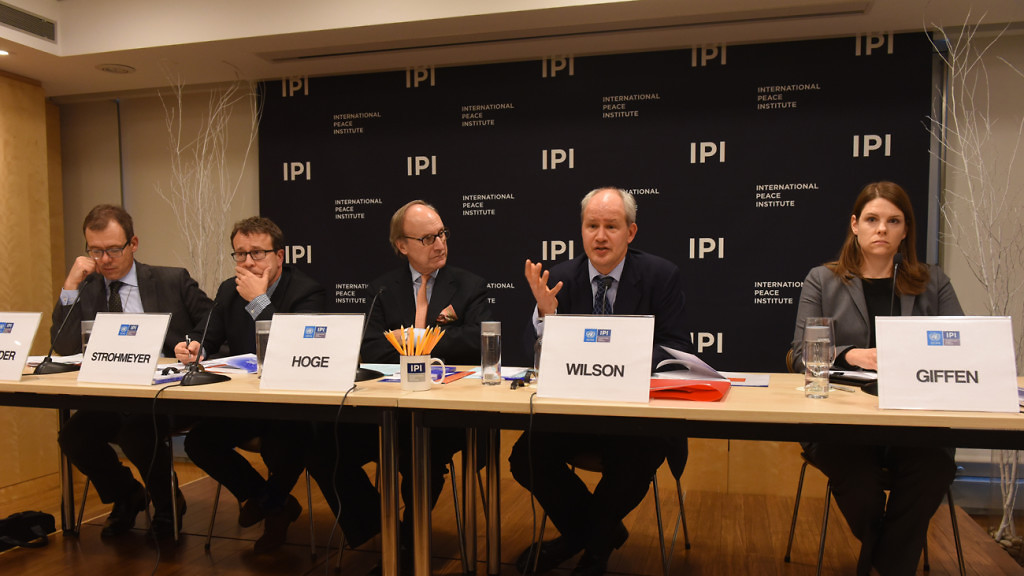 Five years after the adoption of Security Council Resolution 1894, the concept of Protection of Civilians in Armed Conflict (PoC) has become a widely accepted norm at the UN, featuring more and more in Council mandates and becoming a cornerstone of UN missions on the ground.

At a December 2nd IPI policy forum entitled “The Security Council and the Protection of Civilians in Armed Conflict: Reflections and the Way Forward,” the UN Office for the Coordination of Humanitarian Affairs (OCHA) launched two reports assessing the progress of PoC over the last five years. At the event, UN officials, government representatives, and members of the NGO community had the opportunity to share their perspectives on PoC, its progress, its challenges, and how it can be made more effective in the future.

Looking back to 2009 when PoC was introduced through a Security Council resolution for the first time, Hansjoerg Strohmeyer, the head of the Policy Development and Studies Branch at OCHA, expressed optimism at the evolution of the concept.

“We can see how far we have come in these…years of talking about and looking at the protection of civilians,” he said. At the same time, he acknowledged existing challenges in the norm’s implementation, five of which stand out in particular.

Compliance with international humanitarian law, he said, as well as access, protection carried out by peacekeeping operations, accountability, and engagement with armed groups are all areas where the UN—and the Security Council in particular—can push for improvement, he noted.

But the problem, some of the panelists said, is that if the PoC concept doesn’t become clearer—especially on the operational level—any progress in these five core areas will be hard to achieve.

“The concept is too broad and causes confusion on the ground within a peacekeeping operation,” said Alison Giffen, senior associate at the Stimson Center in Washington, DC and co-director of the center’s Future of Peace Operations Program as well as the head of the Civilians in Conflict Project. Ms. Giffen said that right now, the three pillars of PoC—protection through the political process, protection from political violence, and establishing a protective environment— are not helping peacekeepers who are trying to implement it, because they are too all-inclusive.

The two reports launched at the event—the fifth edition of the Aide Memoire for the Consideration of Issues Pertaining to the Protection of Civilians in Armed Conflict and the latest OCHA policy paper on the topic—look at the evolution of PoC and seek to address major hurdles to its implementation.

According to Peter Wilson, deputy permanent representative of the United Kingdom to the UN, one of these major challenges—reconciling PoC with state sovereignty—is largely settled. Within the UN, he said, there is now a growing consensus on the subject and no one questions that PoC is a priority for the UN, a point also made by Olivier Marc Zehnder, minister and deputy permanent representative of the Swiss mission to the UN.

“The issue is more one of consistent application and accountability than it is about the acceptance of the principle itself,” Mr. Wilson said. Indeed, accountability is one of the most challenging obstacles today, he argued, as shown by the failure to refer the case of Syria to the International Criminal Court because of Russian opposition. It is these types of political obstacles that need to be addressed in the future, he added.

During the Q&A session, IPI Senior Adviser John Hirsch raised the question of how to deal with governments that are clearly complicit in harming their own citizens—as in the case of Syria or South Sudan.

One way to address this would be to ensure that the information coming from the ground is accurate and reliable, Ms. Giffen said.

Elmi Duale, the permanent representative of Somalia to the UN, noted during brief remarks that sometimes governments do wish to protect their citizens from violence, but are simply unable to do so because their institutions are weak or non-existent. This, he said, is also an issue that needed to be addressed.