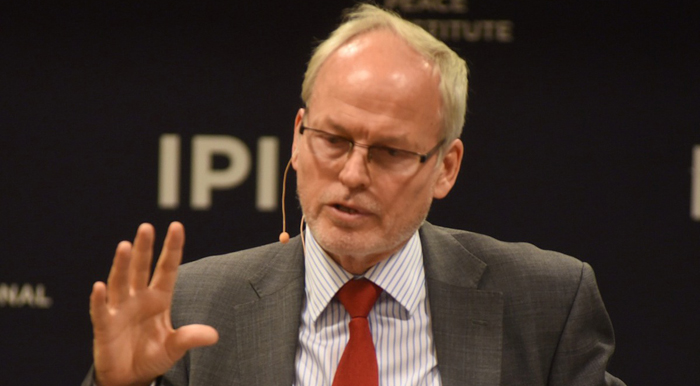 Nicholas Kay, the UN Special Representative of the Secretary-General (SRSG) for Somalia, told an IPI audience that 2015 will be a decisive year for the African country, as its citizens move to establish a democratic and federal system which they hope can ensure their security and development.

Discussing “Somalia in 2015: Federalism and Delivery” on February 5th, a day after briefing the Security Council, Mr. Kay was optimistic about the situation in the country, noting that Somalia today is doing much better than it has over the last 25 years.

“[I’m] excited because 2015 is going to be decisive in terms of whether Somalis can achieve the ambitious goals they have set themselves,” he declared. “To federate their country and to democratize by September 2016.”

According to the UN official, Somalia hasn’t been democratic since the 1960s and has never been a federal system. From 1991 until 2012, the country had no central government.

The September 2016 deadline Mr. Kay referred to is what is also known as the “Vision 2016” process. By the fall of 2016, Somalis hope to hold democratic elections after having first laid the foundations for a democratic state.

“And like building a house, you can’t really do it in a different order,” he said. “So we are starting step by step with the formation of federal member states, negotiating a new constitution, and then the election.”

Looking ahead, the SRSG acknowledged that the task will be a challenging one, especially because of the country’s dire economic situation and political instability. In the last three years alone, he noted, the country has had three different prime ministers. Still, Mr. Kay argued that the 2016 deadline is a firm one, though he added that there’s still quite a lot of work to be done. “We are behind time,” he said. “There’s no doubt about it.”

Security threats at the hands of the Islamist insurgent group al-Shabaab are also a challenge, Mr. Kay said, as in the case of the capital city of Mogadishu, where the group’s attacks have become increasingly high-profile. But the situation is getting better, he said, at least relatively. Between 2013 and 2014, terror attacks decreased from over 800 per year to a little over 400, he pointed out. “Yes, 400 incidents is still not considered safe, but is it improving?” he asked. “I will say yes, and the figures bear that out.”

Mr. Kay and his office—UNSOM—drew praise from the Somali Ambassador to the UN, Elmi Ahmed Duale. Addressing the audience, Mr. Duale said that although the situation in Somalia is never entirely free of worry, the current moment should be one of unwavering support for Vision 2016.

“Now the movement towards progress is seen, and it looks achievable for the first time in a quarter of a century,” Mr. Duale continued. “So we join the optimism rather than the worries.” In explaining his point, the Somali ambassador also argued that the new system will need to have the “ability, expertise, and the support to deliver” to Somali citizens.

Delivery is also about international support, Mr. Kay said. In that regard, he called on the UN and the rest of the international community to continue supporting the process, both politically and financially. “There has to be money poured in,” he said.

On the security side, Mr. Kay praised the international support from the European Union and the African Union (AU). The AU’s peacekeeping mission, AMISOM, works successfully with Somali security forces on the ground, and their partnership is “unprecedented,” he said.

This was the second time that Mr. Kay spoke at IPI—the first being at the beginning of his mandate 16 months ago. Considering a future appearance, possibly at the end of the Vision 2016 process, the SRSG expressed hope that, by then, the country will finally be on track.

“A beautiful house, [with] strong foundations, solid wall, and the roof of a color designed yet to be seen,” he said.