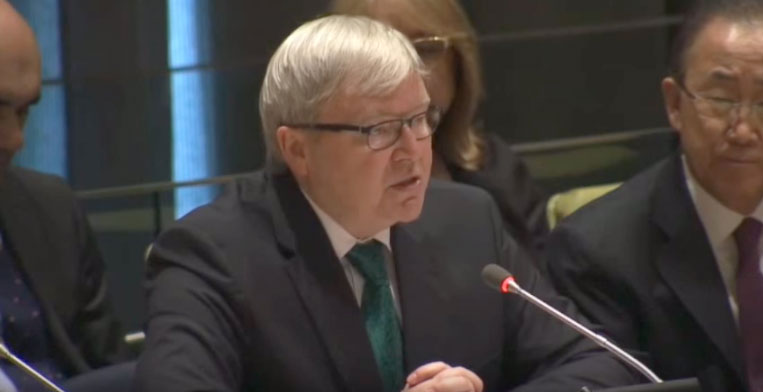 Despite emerging from the ashes of a world war, the forbearers of the United Nations “managed to push through the cynicism barrier, and 70 years later, so must we,” Kevin Rudd, former Prime Minister of Australia and Chair of IPI’s Independent Commission on Multilateralism (ICM). Mr Rudd said this in a statement he delivered to the United Nations High-Level Debate on Peace and Security on October 1, 2015.

Mr. Rudd’s remarks outlined key recommendations from the ICM to the UN such as the “absolute centrality” of taking preventative rather than post-conflict action; establishing a single command with whom “the buck stops” at the UN for all its departments and field operations; creating a “culture and praxis of implementation of the decisions taken by member states,” as well as, ensuring sustainable financial capacity to give effect to UN mandates.

Mogens Lykketoft, President of the 70th session of the UN General Assembly, moderated the high-level debate.