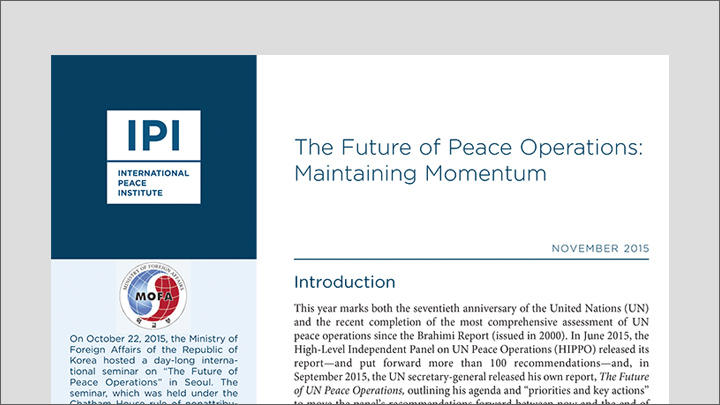 The most comprehensive assessment of UN peace operations since the Brahimi Report of 2000 was completed this year, when the High-Level Independent Panel on UN Peace Operations (HIPPO) issued more than 100 recommendations to make UN peace operations “fit for purpose.” It was followed by the UN secretary-general’s report, outlining key actions to move the panel’s recommendations forward between now and the end of 2016. To support this agenda, how can the UN Secretariat and member states build and sustain the political momentum for the implementation of the recommendations of the UN secretary-general and HIPPO, as well as build on synergies with other global reviews—on the peacebuilding architecture, and on women, peace, and security?

This meeting note outlines key aspects of the agenda for improving UN peace operations and sketches a way forward for maintaining the political momentum for implementation. Focusing on political settlements, the protection of civilians, tailored and context-sensitive responses, and global-regional partnerships, it offers ideas to support ongoing initiatives to build and sustain momentum for change in UN peace operations.

The report stems from an expert meeting in Seoul on October 22, 2015, organized by the Ministry of Foreign Affairs of the Republic of Korea and the International Peace Institute (IPI).

The following are among the recommendations that emerged from the meeting’s discussions: