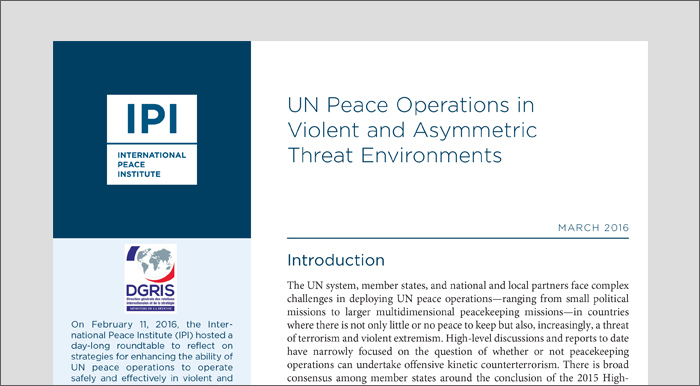 The UN system, member states, and national and local partners face complex challenges in deploying UN peace operations in countries where there is not only little or no peace to keep but also, increasingly, a threat of terrorism and violent extremism. The UN is increasingly asked to “stay and deliver,” forcing it to review its capacity to operate safely and effectively in such environments. This has implications not only for budgets and staff safety but also for the UN’s core business of promoting lasting peace through political solutions.

This meeting note aims to explore the political and practical challenges, opportunities, and implications for UN peace operations of operating in complex security environments, particularly when operating in parallel with a non-UN counterterrorism force.

The report stems from a roundtable IPI’s Center for Peace Operations organized in New York on February 11, 2016, in partnership with the French Ministry of Defense’s Directorate General for International Relations and Strategy (DGRIS). This roundtable was part of the three-year “New Issues Observatory” project, a series of research papers and roundtables examining “new” issues in peace operations.

Although participants agreed that the UN is not the right actor for engaging in counterterrorism operations, they also concluded that the UN is not irrelevant in asymmetric threat environments and can play a useful role in its core activities of protecting civilians and facilitating political processes. However, a number of areas for strategic and operational improvements were suggested: