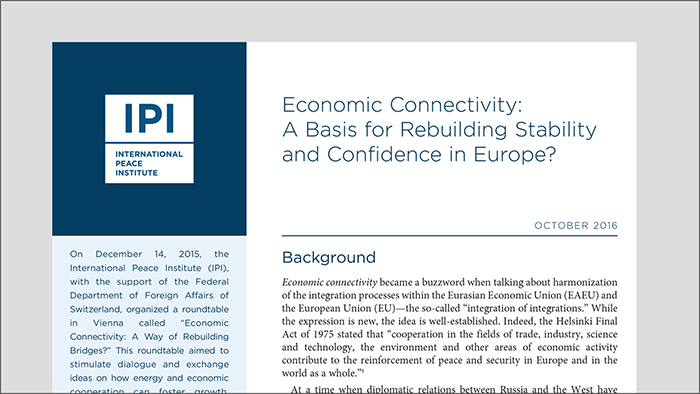 Economic connectivity has become a buzzword when talking about harmonization of the integration processes within the Eurasian Economic Union (EAEU) and the European Union (EU)—the so-called “integration of integrations.” At a time when diplomatic relations between Russia and the West have deteriorated yet states remain linked by economic and energy interests, some see economic connectivity as a possible entry point for maintaining dialogue and rebuilding cooperation.

In response to this increased interest in economic connectivity, IPI, with the support of the Federal Department of Foreign Affairs of Switzerland, organized a roundtable on this topic on December 14, 2015, in Vienna. This roundtable brought together representatives of OSCE participating states, executive structures, the private sector, civil society, and academia.

This meeting note provides an overview of the roundtable and offers some ideas on possible ways to further develop the idea of economic connectivity, including the following: