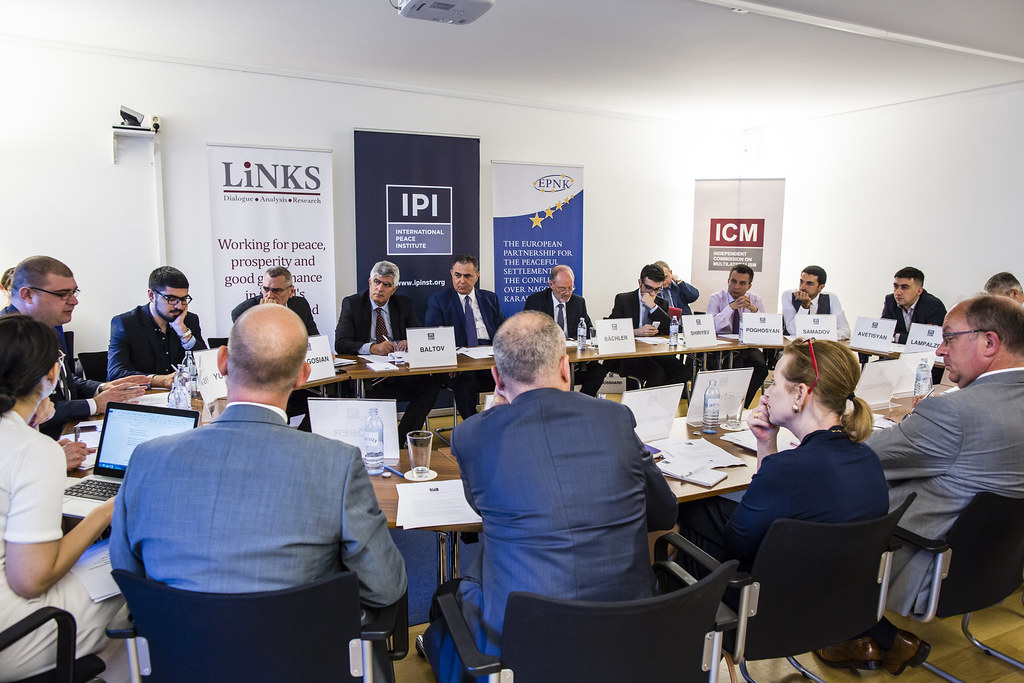 On June 29th, the International Peace Institute, in partnership with LINKS (Dialogue, Analysis and Research), held a meeting in Vienna titled “Nagorno-Karabakh: Can confidence-building measures help bring about a peaceful resolution of the conflict?” This is the fourth meeting organized by IPI addressing the Nagorno-Karabakh conflict.

In his opening remarks, Ambassador Günther Bächler, Special Representative of the Chairman-in-Office of the OSCE spoke about the importance of confidence-building measures and the need to engage with a wide range of stakeholders. He thanked IPI and LINKS (DAR) for hosting the event. This was also echoed by the representative of the Office of the EU Special Representative for the South Caucasus, Atanas Baltov, who reiterated the support of the EU for the work of the OSCE Minsk Group, and spoke about the work of the European Union in the context of the Karabakh conflict and conflict settlement process, particularly through its work with civil society in the framework of the EPNK program.

In a short presentation, LINKS (DAR) Executive Director, Dennis Sammut, talked about the role that confidence-building measures (CBMs) can play in the Karabakh context, addressing the questions of when, between who, on what and in what way, the work can be done.

Richard Giragosian, Director of the Regional Studies Centre in Yerevan, Zaur Shiriyev, Associate Academic fellow of Chatham House in Baku, Benyamin Poghosyan, Vice President for Research at the Armenia National Defence University, Yerevan, and Ahmed Allili, Deputy Director, Centre for Economic and Social Development in Baku shared their views on the topic with participants. The representatives of the embassies of Armenia and Azerbaijan also took the floor.

Participants in the meeting emphazised the importance of CBMs for the resolution of the Karabakh conflict, and expressed concern at the lack of progress in the peace negotiations and the deteriorating security situation on the ground. It was highlighted that CBMs are not a substitute for serious peace negotiations, but it was equally argued that CBMs were often an essential ingredient for any peace negotiations. Among the discussants were the ambassadors of Kazakhstan, Iceland, Belgium, and Cyprus; representatives of other diplomatic missions in Austria; international experts from the region and civil society representatives.