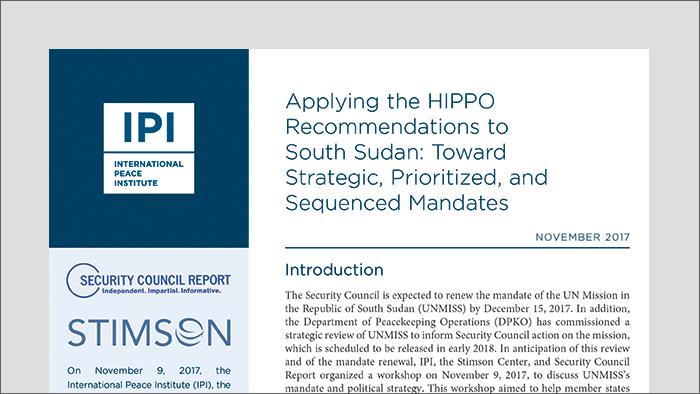 Over the past year, political and military actors and agendas in South Sudan have increasingly fragmented, and the political process has stalled. These developments have undermined the security of civilians, the stability of the country, the humanitarian situation, and the viability of efforts to pursue sustainable peace. The population’s mistrust toward international actors has further curtailed the ability of the UN Mission in the Republic of South Sudan (UNMISS) to implement its mandate.

In anticipation of the release of a review of UNMISS commissioned by the Department of Peacekeeping Operations and the expected renewal of its mandate by December 15, 2017, the International Peace Institute (IPI), the Stimson Center, and Security Council Report co-organized a workshop on November 9, 2017. This workshop aimed to help member states and UN actors develop a shared understanding and common strategic assessment of the situation on the ground in South Sudan. It was the seventh in a series of workshops analyzing how UN policies and the June 2015 recommendations of the High-Level Independent Panel on Peace Operations (HIPPO) can be applied to country-specific contexts.

Participants suggested that UNMISS should postpone activities associated with classic peacekeeping operations in favor of those focused on local mediation, engagement with the South Sudanese population, and reduction of widespread violence against civilians. To accomplish these increasingly difficult tasks, the mission needs renewed support from the international community and the members of the Security Council.