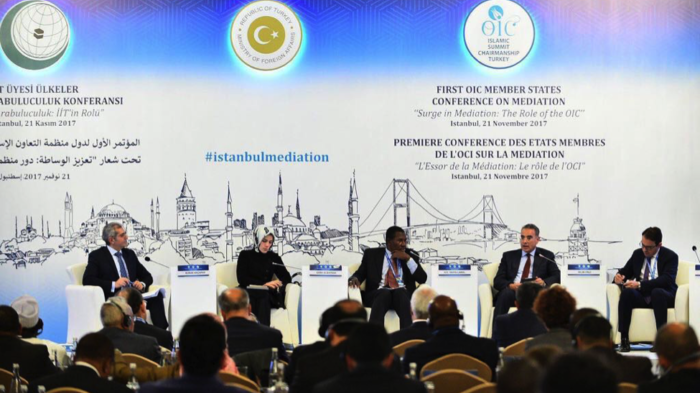 The conference, organized by the Turkish Ministry of Foreign Affairs, brought together an audience of representatives of government, civil society, media, academia, and diplomacy to discuss the “Surge in Mediation: The Role of the OIC.” The Istanbul Conference established the need for strengthening and enhancing the capacity for mediation by including new actors at the community level, and women and youth in the mediation processes. Considering the peaceful resolution of conflicts and mediation as highly important, Turkey maintains that greater engagement in mediation by regional organizations would have a positive effect on overall peace and stability.

Mr. Friji noted that the number of fatalities in the MENA region increased six-fold between 2011 and 2015 as a result of conflict. He emphasized the effects of the OIC’s mission priorities in mediation and conflict resolution. For Iraq, Syria, Israel, Palestine, Nigeria, Somalia, and the Central African Republic (CAR), the OIC plays a significant role “in facilitating the diplomacy of prevention,” he said.

He drew attention to the OIC’s Group of Friends in Mediation, founded in 2010, as a crucial example of promoting the culture of mediation and engaging more regional organizations and women in mediation. Mr. Friji also emphasized the diversity of the OIC member-states as a “reflection of pluralism within Islam,” which enables them to “offer a model for non-violent, sectarian cooperation and collaboration in cases of violence pertaining to Islam or Muslims–whether it be states, non-state actors, or minority communities.”

He highlighted the Tunisian National Dialogue Quartet, which steered the country away from the brink of civil war, as a prime example of the way in which “an effective mediation process at the domestic level responds to the specificity of the conflict.”

In line with the Final Report of the Independent Commission on Multilateralism, and IPI’s Lost in Transition publication by Francesco Mancini and José Vericat, he affirmed that “instigating mediation on the national level increases inclusivity and has direct impact on the ground.” He underlined the need to create a quality education system to help establish a culture of constructive behavior, mediation and social partnership— with a curriculum that could be incorporated at the primary and secondary school levels, as well as by universities. He reiterated the need to develop a good governance strategy based on participatory, inclusive, and rights-based sustainable development strategies to establish effective preventive mediation.

Noting the importance of increasing the involvement of women in mediation efforts, he pointed out the Nordic Women Mediators Network (NWMN), the African Union-led FemWise-Africa, the recent formation of the Mediterranean Women Mediators Network, and the Tunisian Quartet as prime examples of initiatives led by women which brought about lasting peace agreements.

Mr. Friji stressed the need to prioritize homegrown mediation roadmaps and establish a structure that facilitates dialogue between regional and sub-regional organizations, educators, mediation practitioners and researchers to form the foundations of a culture of national mediation.

Turkey, as the current Chair of the Summit and the Executive Committee of the OIC, organized the First OIC Member States Conference on Mediation in Istanbul on November 21, 2017.

Organized in collaboration with the OIC General Secretariat, the conference was opened by Ahmet Yıldız, Turkish Deputy Minister of Foreign Affairs and Abdallah Alim, Assistant Secretary General of the OIC for Political Affairs.

The audience at the First OIC Member States Conference on Mediation