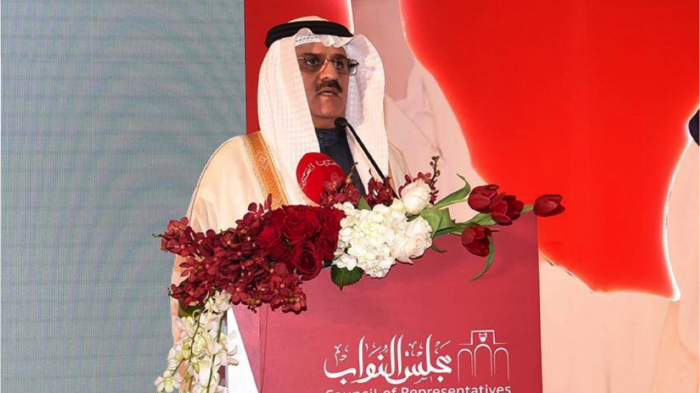 Marking 17 years since Bahrain’s creation of the National Action Charter (NAC), IPI MENA and the Bahrain Parliament held a joint conference on Feburary 8, 2018 entitled, “Future Prospects, Sustainable Development and Peace.” The conference comprised of three panels that delved into political, religious, and economic aspects of sustainable development and democracy.

Opening the conference, H.E. Ahmed Bin Ibrahim Al Mulla, Bahrain’s Parliament Speaker, recalled the contribution of the NAC in restoring constitutional institutions, including the return of the parliamentarian activity. The Speaker said the current reform strategies are irreversible, and that Bahrain aims to join the global process towards progress, development, and peace.

Speaking on behalf of IPI President Terje Rød-Larsen, Nejib Friji, Director of IPI MENA, stressed the importance of this joint initiative in taking the first steps towards developing a collaborative framework on the road to advancing sustainable development and peace.

Mr. Friji commended the frameworks constructed by Bahrain’s constitutional monarchy in enabling the Kingdom to thrive in a number of fields that are crucial to and interconnected with sustainable development.

Recognizing Bahrain’s efforts to support gender equity and women empowerment as part of these developments, Mr. Friji stated that “women constitute half of Bahraini society, and the government has recognized their crucial and integral roles in the sustainable development of the Kingdom.” In particular, he noted the advancement and empowerment of women in the different domains, politically, economically and socially, “through the enactment of laws and legislations to integrate women in the development process of the Kingdom.”

Emphasizing the tolerance and cooperation valued in the Kingdom, Mr. Friji also commended their practical application in ways “that have allowed the IPI to host interreligious dialogues with representatives of the many religions that coexist peacefully, and that have maintained strong relations with the Kingdom.”

Mr. Friji stated that these developments have “enabled the Kingdom to maintain strong ties with the United Nations in observing their democratic policies in efforts to safeguard the diversity and unity of the Bahraini society.”

Concluding his remarks, the IPI MENA Director noted that, although several challenges remain on the road ahead, IPI will continue to assist, based on the values of the UN Charter, in the quest for peace, development, and security.

“This is only the first step,” Mr. Friji stated, “in the joint Bahrain Parliament and IPI partnership that will feature research, convening, ‘think tanking’ towards ‘do-tanking,’ and other activities.”

The conference was attended by Speakers of the Council of Representatives from Saudi Arabia, Kuwait, Oman, and the United Arab Emirates, as well as senior government officials, diplomats, regional and international organizations, academics, journalists, and media representatives.