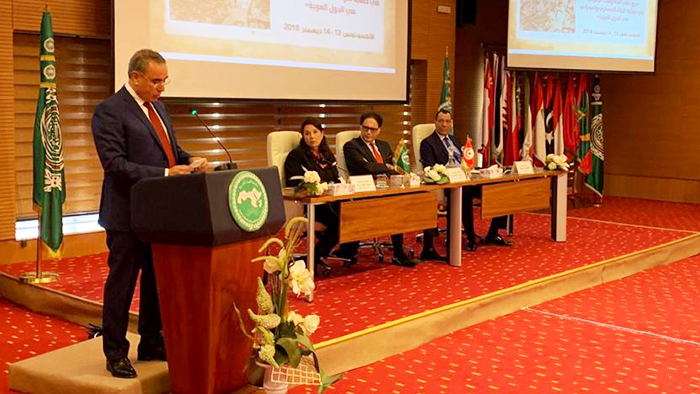 During an event in Tunis on December 13, 2018, IPI-MENA Director Nejib Friji warned against perils to world heritage and called on the international community to provide all conditions of protection and preservation.

In a statement delivered at the opening plenary session of the Arab League Educational, Cultural, and Scientific Organization’s (ALECSO) Fourth Meeting of the Liaison Officers of the Architectural and Urban Heritage Observatory in the Arab States, Mr. Friji reiterated the importance of the protection and conservation of world heritage as crucial criteria to achieve sustainable development and social peace.

Likening cultural and world heritage to a running thread that ties and weaves civilizations together, Mr. Friji highlighted the contribution of world heritage to the development of relations between countries and regions. “It thus becomes a work of cooperation and coordination, paving the environment for peaceful relations of stability and development beyond the borders and members of one community.”

Referring to the major damage incurred by radical religious groups to sites such as the old city of Mosul in Iraq or Sana’a in Yemen, he stated that “the destruction of cultural and world heritage strikes at the very foundation of a society, deliberately erasing common roots and destroying social fabric, creating a breeding ground for conflict, instability and social unrest.”

The IPI-MENA Director emphasized how the ruination of “oral traditions, museums, artifacts, temples, and statues” is detrimental to regional stability and social peace. He stated, “the destruction of cultural heritage ultimately amounts to a violation of human rights, and subsequently humanitarian law—both of which are core requirements to achieve sustainable development and peace.”

At a time when extremist groups are distorting religion and using the message of Islam as a political tool to erase cultural heritage, Mr. Friji drew attention to the significant role of religious leaders in the Islamic world. He mentioned the example of the religious representatives who convened at IPI-MENA office in Manama, Kingdom of Bahrain in 2016, who called for religious leaders to unite in their condemnation of the destruction of world heritage by religious extremist groups.

Underlying the importance of involving youth, Mr. Friji stressed that “the value of our cultural heritage must become part of a national curriculum from primary schools up to universities”, and that education is a powerful tool that must be incorporated to instill a sense of common responsibility and duty within citizens.

In order to achieve sustainable development and peace, “a holistic approach that engages all relevant stakeholders: civil society, nations at the grassroots level, governments, regions, and the multilateral system” is required.

He concluded his statement during the opening plenary session by calling on all relevant stakeholders and key players locally, regionally, and internationally “to uphold, maintain and protect world heritage, to respect past generations, educate present ones, but most of all, to pass down to future generations their cultural history.” He emphasized that the collective responsibility of prevention is a mechanism to safeguard long-lasting peace.

The meeting focusing on the creation of the Observatory of Urban Architectural Heritage in Arab Countries, it was chaired by Hayat Guermazi, Director of the Cultural Department of ALESCO, and featured participants Mounir Bouchenaki, Adviser to UNESCO Director General, Consultant on the protection and conservation of world heritage, Karim Hendili, Coordinator at the World Heritage Center, UNESCO, Bilel Chebbi, ISESCO Representative and IPI MENA-Director Nejib Friji.

Mr. Friji highly commended the creation of an Observatory for Urban Architectural Heritage, highlighting the platform it creates that can allow the development of international legal frameworks that will protect civilians and the state of conflict, as well as the archeological and cultural sites.

Describing the way forward, he concluded that these recommendations “may be used to form the basis for a package of laws that may be brought up by ministers to international forums to become elements of binding international laws.”