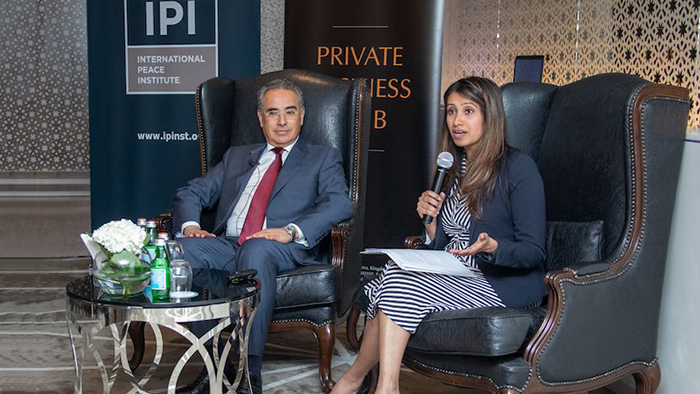 Mr. Friji called for further commitment for achieving regional cooperation and integration through sustainable development and peace in the MENA region. He stressed the importance of integrating universal values of diplomacy and dialogue across all sectors of society.

Pointing to the European Union’s formation following the World Wars as an example of regional integration, Mr. Friji stressed the need for a “homegrown” initiative in the Middle East and North Africa.

“We must engage regional players to find solutions to regional problems that are connected to wider global issues,” he stated. He underlined the formation of IPI’s Taskforce on Regional Cooperation and Integration in the MENA Region as a core project aiming to produce concrete, actionable ideas for cooperation.

During an interactive slide-show presenting the Global Leaders Series, Mr. Friji said, that the initiative’s aim “is to engage in debate that will nurture a constructive and dynamic exchange of views on a range of issues—peacebuilding, development and security.”

Mr. Friji pointed to an initiative running parallel to IPI’s Global Leaders Series, the Future Leaders Series, which provides a platform to actively involve and empower youth as writers and key actors in the promotion of the Culture and Education of Peace.

He also noted the recent book launch of 17 SDGs (UN Sustainable Development Goals) by 12-year old Adam Jade Kadia, the youngest peace writer in the region, which was held at IPI MENA as part of the Future Leaders Series program. The book launch convened dozens of schoolchildren to discuss their contribution to promoting the SDGs within their societies.