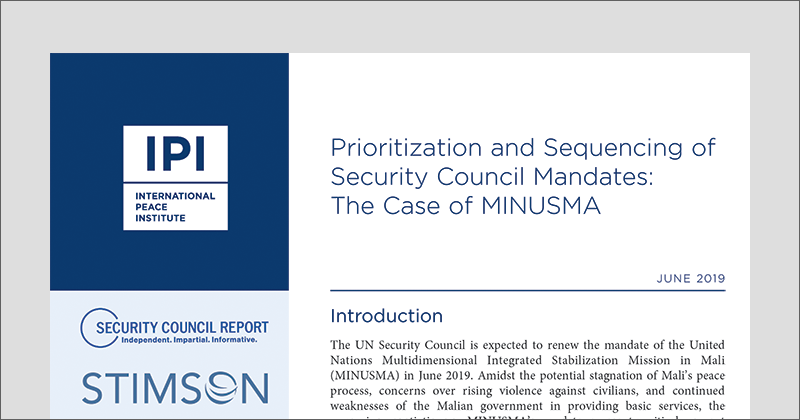 The UN Security Council is expected to renew the mandate of the United Nations Multidimensional Integrated Stabilization Mission in Mali (MINUSMA) in June 2019. Amidst the potential stagnation of Mali’s peace process, concerns over rising violence against civilians, and continued weaknesses of the Malian government in providing basic services, the upcoming negotiations on MINUSMA’s mandate represent a critical moment to reflect upon the Security Council’s strategic engagement in the country.

In this context, the International Peace Institute (IPI), the Stimson Center, and Security Council Report organized a workshop on May 13, 2019, to discuss MINUSMA’s mandate and political strategy. This workshop provided a forum for member states, UN stakeholders, and outside experts to share their assessments of the situation in Mali. The discussion was intended to help the Security Council make more informed decisions with respect to the strategic orientation, prioritization, and sequencing of the mission’s mandate and actions on the ground.

The workshop highlighted several tensions in the Security Council’s approach to pursuing peace and security in Mali, specifically the tensions inherent in a conflict that is simultaneously transnational and hyper-localized. It also highlighted the debate around whether the mission should focus more on the north or the center of Mali. Participants largely agreed that MINUSMA’s current mandate remains relevant but also put forward several proposals to further strengthen and adapt the mandate in the interest of advancing the mission’s political strategy and achieving the Security Council’s objectives in the coming year. Recommendations included expanding MINUSMA’s political work to the center of the country and supporting a national dialogue, making protection of civilians a strategic priority, increasing support to justice and reconciliation, and strengthening regional coordination.