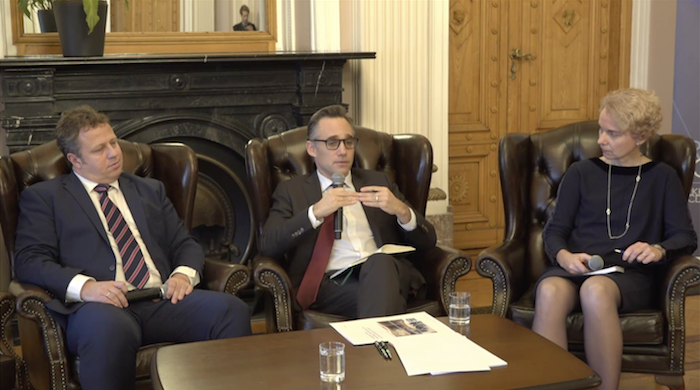 In April 2019, Dr. Lupel and Lauri Mälksoo, Professor of International Law at the University of Tartu in Estonia, published a policy paper entitled, “A Necessary Voice: Small States, International Law, and the UN Security Council.” The paper concluded that small states on the Security Council are well-placed to provide an important, credible voice with moral authority to remind all member states of their obligations under international law.

Dr. Lupel’s first stop was the Estonian Academy of Science in Tallinn on October 29th, where he delivered remarks during a half-day event. “Recent years have witnessed several cases where small states have driven debates on the Security Council defending international law and the rule based order, in particular international humanitarian law,” he said. The event featured Estonian President Kersti Kaljulaid, Foreign Minister Urmas Reinsalu, and State Secretary Taimar Peterkop, along with academics from Columbia University, the Estonian Foreign Policy Institute, and others.

As an example, Dr. Lupel provided this: “In early 2016, the small state of New Zealand (population under 5 million) initiated discussion on a possible Security Council resolution to help reinforce that bedrock of IHL by convening a multi-stakeholder round table at its UN mission. Soon, a draft resolution was being negotiated by five penholders from a diverse range of countries: Egypt, Japan, New Zealand, Spain, and Uruguay. After extensive negotiations, the final resolution served to clearly remind member states that ‘intentionally directed attacks’ on health facilities and medical workers during armed conflict are war crimes.

“From a negotiation standpoint, the resolution was a tremendous success. It was adopted unanimously, with eighty-five member states as co-sponsors—spearheaded by the bridge-building diplomacy of two small states in partnership with others.”

Dr. Lupel then went on to Helsinki, where on October 30th, about 50 participants from a broad cross-section of the diplomatic community attended a Finland launch of the small states paper, where he delivered an expanded version of his Tallinn talk followed by an extensive Q&A session. The event was moderated by Anna Salovaara, Director of the Unit for UN and General Global Affairs, Ministry of Foreign Affairs of Finland.